This morning we told you how to find your UPS tracking number from Apple for your iPhone 6s.

Now, it appears the first pre-orders made with Bell and Virgin Mobile have started shipping, as Canada Post tracking numbers have been sent out to some customers, like iPhone in Canada reader Morgan (Virgin Mobile customer Dan similarly informed us of the same): 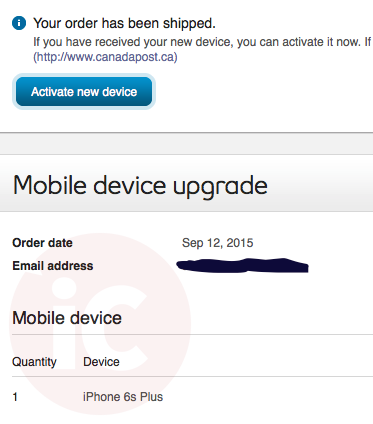 For iPhone 6s and iPhone 6s Plus customers on Bell and Virgin Mobile, you will be able to enable Wi-Fi Calling, as the company announced support for the feature last week.

For customers with older iPhones, unfortunately your device won’t be supported according to Bell, unlike Rogers, which has Wi-Fi Calling for iPhone 5c users or newer.

If you made a pre-order with Bell and Virgin, let us know if you’ve received your tracking numbers yet.