Remember that nasty unlocking fee carriers charge you? Well, that’s a nice revenue stream for carriers, according to the latest data revealed by the CRTC at the request of Canada’s Public Interest Advocacy Centre (PIAC) (via MobileSyrup).

While the CRTC doesn’t break down the data by carrier, it is still interesting to see how much revenue this fee has brought carriers during the past three years. The data was submitted to the CRTC, and the regulator released it at the request of PIAC. 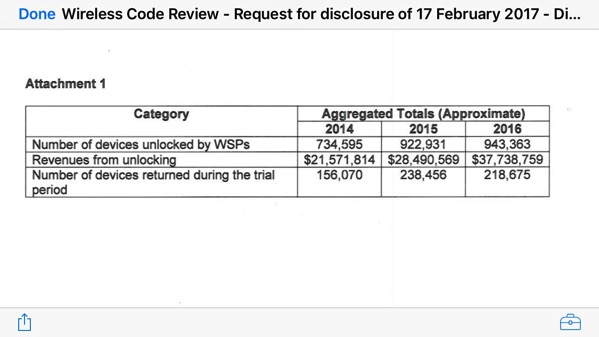 As you can see from the table above shared by Marina Pavlovic on Twitter, the number of handsets locked by the carriers increases year by year, as does the revenue generated by the fee. What’s worth noting is the difference between the data from 2014 and 2016.

During the CRTC review of the Wireless Code introduced in 2013, this unlocking fee was mentioned by Freedom Mobile. The carrier formerly known as Wind Mobile suggested the CRTC do away with all unlocking fees.