VMedia has launched its live TV and on-demand streaming service, RiverTV.ca in Canada. The service has over 30 live channels and is available on iOS, Apple TV, Android, Android TV (NVIDIA SHIELD and select models from Sony, Sharp, Philips), Roku, Amazon Fire TV and the web.

Last month we told you the service was about to launch and after a beta period, RiverTV is now officially live in Canada, for $16.99 per month.

According to VMedia, they note RiverTV is “Canada’s first live TV and on-demand streaming channel platform,” or the first virtual broadcasting distribution undertaking, or vBDU.

There are also ‘a la carte’ channels available to add, such as Hollywood Suite, i24NEWS and Nick+(coming soon) for now.

RiverTV also integrates with Apple’s single sign-on service and also Siri for the discovery of shows and other content. The service also allows users to pause and play live TV, while also ‘look back’ at shows up to 7 days ago. 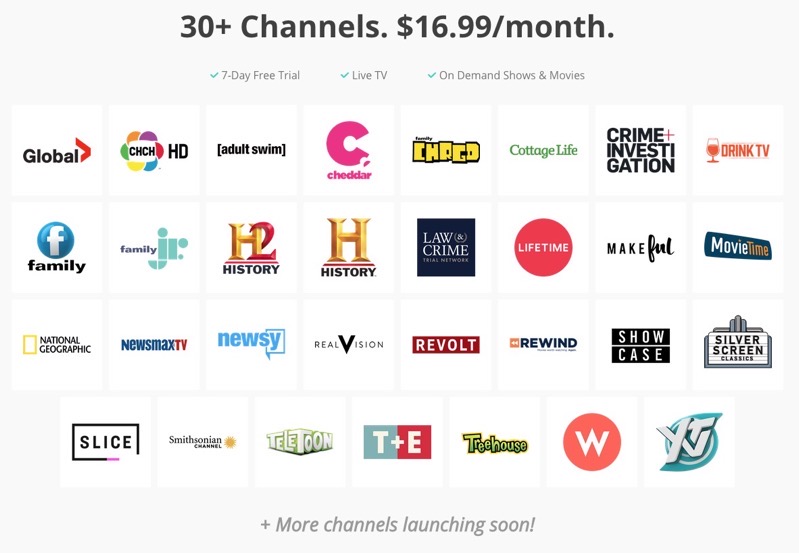 RiverTV says the service targets cord-cutting Canadians as it just requires internet to stream and does not require an accompanying internet plan like other comparable services from traditional cable companies.

Why is RiverTV an attractive proposition for Canadians? George Burger, Co-Founder VMedia, told iPhone in Canada in an interview, “First of all, it is the best value for your money for top specialty channels. Over 30 channels for $16.99 is unheard of in Canada, and all are channels people want to watch, not channels they are required to take under broadcast regulations.”

“Second it is truly hassle-free live streaming TV for cordcutters alienated by the cumbersome conventional system of costly set top boxes, installations, and mandatory cable service. There are other app based TV services, like Optik TV, Alt TV, Ignite, and the newest, Virgin TV, which you mentioned recently, but they all require you to get the app provider’s often very costly internet package. RiverTV is truly over the top, meaning you can download and watch in an instant, regardless of whose internet service you have at home or on your phone-just like Netflix,” added Burger.

As for the biggest obstacles to get RiverTV up and running, Burger said it was getting channel providers to jump on board.

“RiverTV is a pioneering approach to TV packaging and distribution, and many programmers either don’t want to deal with us for competitive reasons, or because they may not have all the necessary rights cleared for a pure OTT streaming service. We broke a lot of ground in persuading programmers that we can help them reach and reclaim the receding market of cordcutters, and we are very grateful to our partners for coming on board,” said Burger.

As of today, RiverTV is available for $16.99 CAD per month after a 7-day free trial.