RootMetrics has performed a series of wireless network tests in the Edmonton metro area, and has concluded Rogers, TELUS and Bell have tied for first place in their numerous test categories.

In their Overall Performance category, the Big 3 tied for first place, while WIND Mobile was in the lone fourth spot: 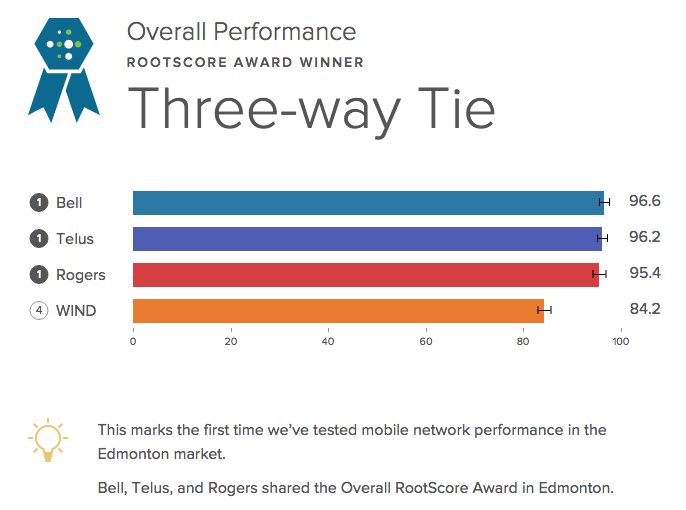 In their Network Reliability and Network Speed tests, again there were three-way ties for the top spot. WIND Mobile’s network reliability score fared higher in these tests, scoring 92.2 and kept pace with the Big 3:

In tests regarding data, Rogers and Bell tied for first, while TELUS was in third (although the numbers are still very close); call quality resulted in another three-way tie among the Big 3; texting tests saw TELUS and Bell tie for first, while Rogers get third place (again, the numbers are very close). WIND Mobile had decent call and text scores, but their data scores were behind incumbents:

Median data speeds from the Big 3 ranged from 20.9 Mbps to 21.2 Mbps, while WIND saw median download speeds of a paltry 2.5 Mbps.

Julie Dey, RootMetrics Vice President, said in a statement “Our first-ever round of testing in Edmonton, similar to the results from Calgary, shows that the three national carriers are providing their customers with a highly reliable mobile experience,” following up to say “All in all, the good news for consumers in Edmonton is that there are multiple options for choosing a carrier that’s both reliable and fast.”

RootMetrics’ tests included 19,928 call, data and text tests “across all hours of the day and night” from May 3 to May 9. Using a variety of smartphones purchased from carrier stores, indoor tests were completed at 27 locations, while outdoor tests involved driving 1,487 kilometres.

The company has previously released wireless network tests for Vancouver and Calgary as part of its 2nd Half 2015 reports.