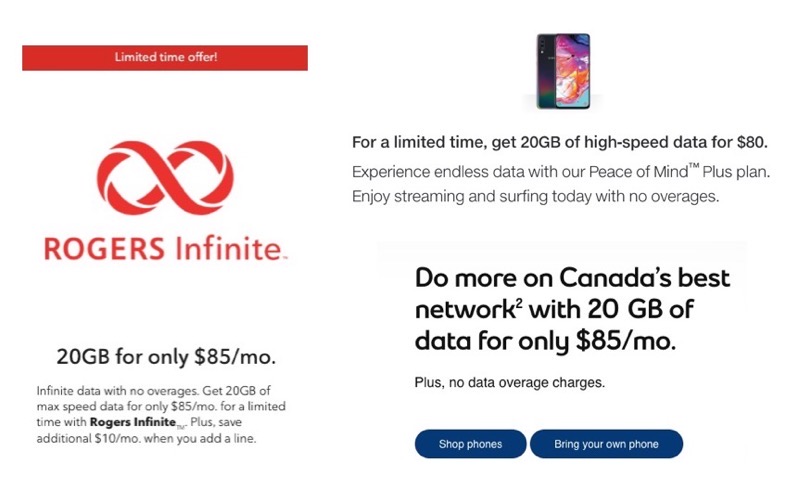 Rogers, Telus and Bell have been simultaneously offering promotional pricing on their 20GB unlimited data plan for $75 per month, but now another promo has magically surfaced at the exact same time.

The ‘Big 3’ are advertising $85/20GB unlimited data plans right now, which are $10 off the regular price of $95 per month. These plans will see throttled data to 512 Kbps once you’ve exceeded your allotted data.

The Rogers and Telus plans offer shareable data with other devices. Bell’s unlimited data plan does not. You’ll need to get the Bell ‘Connect Everything 20’ plan and pay for extra data at the rate of $10/100MB up to 800MB, then $0.15/MB thereafter (the math works out to $110 for 1GB of data overages).

Previously, the $75/20GB promo plan advertised over the past few months by the ‘Big 3’ did not include shareable data with other devices (except the Rogers offering), as you’d have to pay $10 extra for that feature.

These plans come with unlimited nationwide talk and text, plus the usual extras like caller ID and voicemail. There’s no end date, but it’s most likely these are targeting weekend shoppers, again.