Rogers, TELUS, Bell in Tight Race for Top Wireless in Winnipeg: RootMetrics [u] 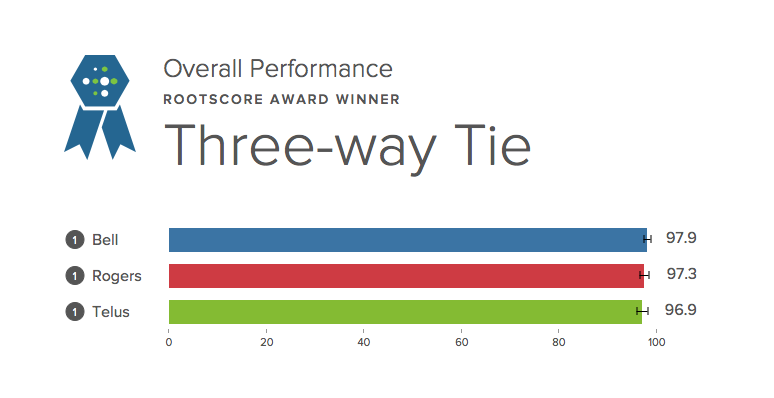 The Big 3’s wireless network is top notch in Winnipeg, according to RootMetric’s first-ever testing of mobile networks in the metro area. Telus, Bell, and Rogers provide a strong combination of a reliable and fast network, the independent mobile network performance testing firm has concluded after conducting testing indoors at 28 locations and driving about 1,266 km (787 miles) across the Winnipeg metro area.

After performing 15,041 call, data, and text tests at all hours of the day and night between June 11 and June 16, RootMetrics awarded all three national carriers the Overall Performance RootScore Award, as they all scored 96.9 or above.

Digging deeper into the report we find that Bell and Telus shared the top spot in text performance, while Rogers fell less than one point behind. When it comes to download speeds, Bell is faster than the other two, with a median download speed of 19.8 Mbps, while Rogers recorded the fastest median upload speed at 16.5 Mbps. By the way, Rogers didn’t record any dropped calls.

“Our latest rankings of the mobile networks in Winnipeg show all-around strong mobile performance,” said Julie Dey, RootMetrics vice president. “To have all three carriers tie in five out of six tested categories is excellent news for mobile consumers in Winnipeg, and means you really can’t go wrong in your choice between the three major national carriers.”

Update: In an email sent to us, RootMetrics noted: “This is the first time we have tested the Winnipeg market; for 2015 testing, we are focused on the major national carriers, with a few regional exceptions (e.g., Wind and Videotron). Going forward, it is possible that we will add testing for MTS in the Winnipeg area.”

Rogers’ proposed $26 billion takeover of Shaw Communications, if successful, could deliver a $216 million payday to 12 hedge funds that bet on it — reports Reuters. The controversial and heavily contested merger has a January 31 deadline. With the Federal Court of Appeal rejecting the Competition Bureau’s appeal of the merger on Tuesday, Rogers and...
Nehal Malik
17 hours ago