The current $60/10GB promo plans being offered by Rogers/Fido, Telus/Koodo and Bell/Virgin are on fire right now (or, “lit”; is that the proper usage?!), but carrier employees are unable to keep up with demand from customers wanting to switch to these plans.

Customers of the ‘Big 3’ calling on the phone are seeing wait times of 1-3 hours, while even social media channels are overwhelmed, not even responding to queries today. Some poor Koodo customers found out the hard way phone lines disconnect after waiting two hours on hold (that is when the Virgin 1-800 number is not saying it’s not in service). Ouch.

@RogersHelps I can't get through to anyone regarding the $60/10 GB promo. Tried FB, Twitter, SMS, chat, phone, nothing. I know it's busy but I've been trying since last night!

To help alleviate pressure on phone and retail employees, Fido announced earlier tonight customers can now jump on the $60/10GB plan by switching to it themselves via My Account on Fido.ca.

“Make sure to get in on our Holideals while they’re hot! Skip the wait times and stay one step ahead with our self-serve options. Select our $60 5GB BYOP Pulse plan, and a 5GB bonus will be automatically added!”, reads the tweet from @FidoSolutions. 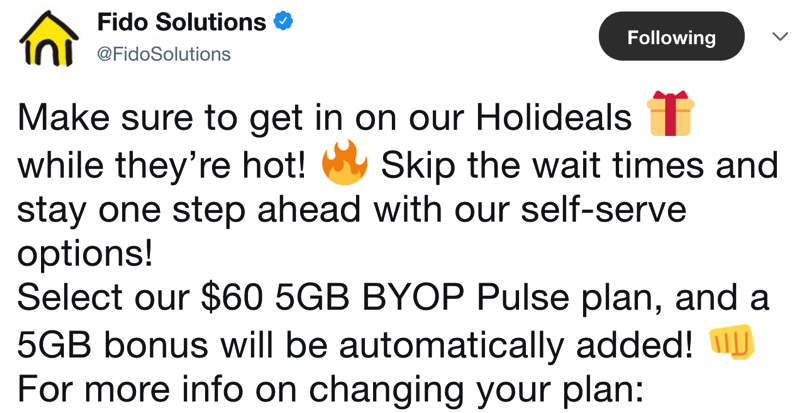 Make sure to get in on our Holideals ? while they’re hot! ? Skip the wait times and stay one step ahead with our self-serve options!
Select our $60 5GB BYOP Pulse plan, and a 5GB bonus will be automatically added! ?
For more info on changing your plan: https://t.co/Ejix5lbRrm

These promo plans are set to be available until December 18 (Fido/Virgin/Koodo goes until Dec. 19; double check yourself too), so it’s in your best interest to switch to it before they ‘expire’.

If you’re having trouble with wait times on the phone, try visiting a Rogers/Telus/Bell dealer such as Best Buy, or visit smaller kiosks such as The Mobile Shop within Superstore, or other wireless kiosks such as those found at Walmart or Costco.

What method did you use to switch over to these $60/10GB promo plans? Phone? Social media? Visiting an actual store? Click here to vote and tell us which carrier you picked for this popular 10GB plan.

Update: Rogers customers can also switch to this plan via the Rogers website and logging into their account.