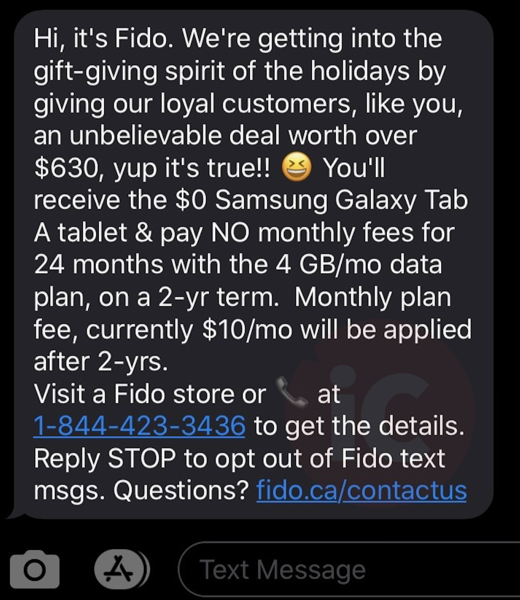 Fido is offering up a free tablet with data plan for 24 months to some customers, as its says it’s in the “gift-giving spirit” for its loyal customers.

Up for grabs is a Samsung Galaxy A tablet and a 4GB monthly plan, all for free on a two-year term. Fido says this deal is worth over $630. So basically a free tablet with a data plan for 24 months.

“Hi, it’s Fido. We’re getting into the gift-giving spirit of the holidays by giving our loyal customers, like you, an unbelievable deal worth over $630, yup it’s true!! You’ll receive the $0 Samsung Galaxy Tab A tablet & pay NO monthly fees for 24 months with the 4GB/mo data plan, on a 2-yr term. Monthly plan fee, currently $10/mo will be applied after 2-yrs.”

Offering up a free tablet and data plan to customers is one way to pad subscriber numbers when it comes to tablet activations and monthly spends.

Yesterday, we told you Fido is again handing out 5GB of free monthly wireless data to select customers.

Did you receive this offer from Fido?

Rogers and Shaw today announced an extension of their proposed $26 billion merger, along with the sale of Shaw-owned Freedom Mobile to Quebecor’s Vidéotron in a side deal that's part of the broader transaction, to February 17, 2023. "All parties remain committed to the pro-competitive transactions, which will deliver significant benefits to Canada and Canadian...
Nehal Malik
18 hours ago