For existing Fido Home Phone users, the company has updated its $10/month plan to include call waiting, call forwarding and conference calling, which previously was a $2/month add-on. 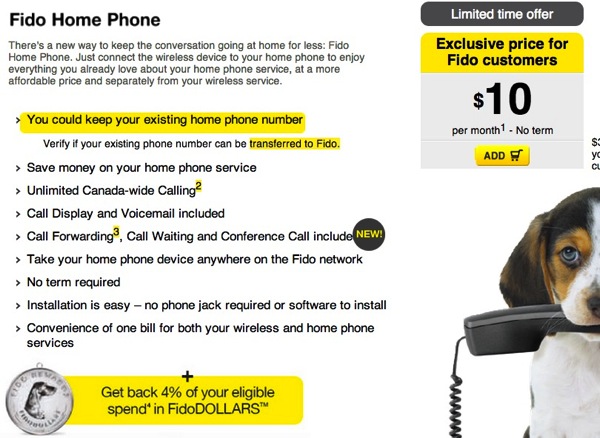 Rogers and Fido launched their wireless home phone service last July. Customers must purchase a Wireless Home Phone unit, which their existing phone line plugs into. Features include unlimited Canada-wide minutes, call display and voicemail and no term. The unit has as SIM-card inside so as long as it has AC power and you’re within Rogers/Fido coverage, you’ll have a phone line to use.

The $10/month plan is for existing Rogers and Fido customers only. You should call in today and switch to the updated plan which now includes call waiting/forwarding and conference calling. It’ll save you an extra $24/year by doing so!

According to the fine print: Offer ends August 7, 2014 (in British Columbia, Alberta, Ontario and Atlantic Canada), subject to change without notice.

Rogers’ proposed $26 billion takeover of Shaw Communications, if successful, could deliver a $216 million payday to 12 hedge funds that bet on it — reports Reuters. The controversial and heavily contested merger has a January 31 deadline. With the Federal Court of Appeal rejecting the Competition Bureau’s appeal of the merger on Tuesday, Rogers and...
Nehal Malik
3 seconds ago