Fido My Account Launches ‘Fido Flip’ Contest with Over $75,000 in Prizes

Fido, a wireless subsidiary of Rogers, has launched a contest within the Fido My Account iOS and Android app, called Fido Flip.

Wireless customers can play Fido Flip games up to five times per day, for a chance to win over $75,000 in prizes, the company explains. Prizes up for grabs include gift cards worth up to $5,000, plus latest devices from Samsung, Google, LG, plus game consoles from PlayStation, XBOX and Nintendo.

To play, just download the latest version of the Fido My Account iOS app—tap ‘more’ in the bottom right corner of the home screen, then tap ‘Fido Flip Game’ to start. 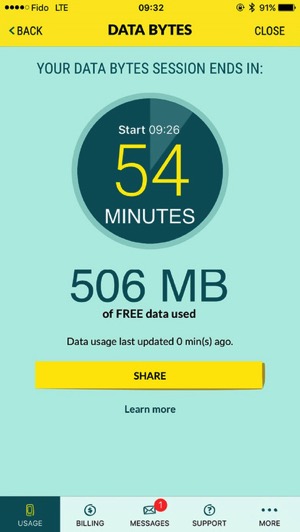 Recent reviews in iTunes by iOS users claim the Fido My Account app is not refreshing data accurately, with some seeing a 12 hour delay in usage statistics.

Earlier this year, the Fido My Account iOS app was redesigned, plus added Touch ID support and push notifications. Back in July, the app introduced Data Bytes, which provides customers with five hours of free data per month.

Rogers-owned Fido is offering a new Black Friday plan only in Quebec, available from Best Buy. According to RFD users, the Best Buy locations in Rosemarie and Vaudreuil are offering up a $25 plan with 15GB data for bring your own phone customers. This plan is actually the $45/15GB plan in Quebec with $20 credit […]
IIC Deals
15 hours ago

After Koodo launched a $45/50GB promo plan for Black Friday today, Rogers-owned Fido has now matched this offer. That’s according to reliable mobile insider ‘Thatdealguy’ on RFD, who noted the matching offer from Fido also is eligible for additional gift cards and rewards points bonuses at retailers such as Walmart, Best Buy, The Mobile Shop […]
IIC Deals
20 hours ago

Rogers's President of Integration, Dean Prevost, accidentally revealed during a Competition Tribunal hearing against Canada's Competition Bureau on Thursday that he is set to receive a $2 million bonus if the company's proposed $26 billion acquisition of Shaw Communications goes through — reports the Hanna Herald. This figure had previously been confidential but slipped out...
Nehal Malik
2 days ago