Rogers subsidiary, Fido, is offering up a monthly discount of $10 per month for six months to select customers right now.

According to one iPhone in Canada reader, Fido sent out text messages this morning saying the following:

Hi, it’s Fido: Great news! We added a $10 discount off your monthly service fee for 6 months. This is an exclusive offer just for you to thank you for being a Fido customer. You don’t have to do anything. This discount will start on your next bill. Questions? Visit www.fido.ca/contactus for a list of ways you can reach us. 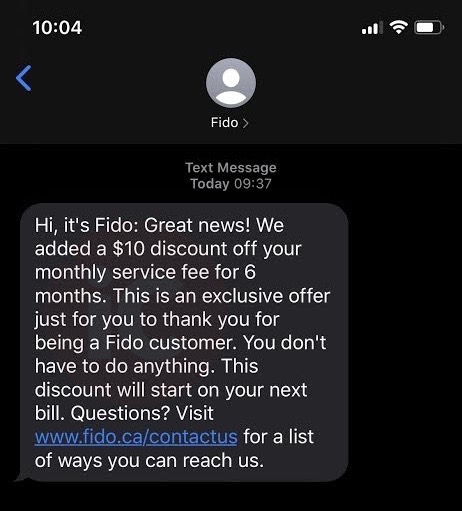 Fido says this “exclusive offer” is to thank users for being Fido customers. No action is required as the credits are applied automatically to accounts.

Last month, Fido offered a 5GB free monthly data bonus to select customers, while similarly gave a 2GB data bonus to another group of customers in November as well.

Why the free data and price drops? The federal government plans to reduce cellphone plans by 25% and implement measures to increase competition, to force wireless prices down. There’s also a wireless review underway right now by the CRTC, exploring MVNOs (mobile virtual network operators), which would force incumbents to allow smaller companies network access, for the sake of reselling services.

The pressure is on the Big 3 to lower pricing and by offering free data and monthly discounts, some suspect it may be an attempt to get ahead of government regulations by painting a rosier picture when it comes to the numbers, than what people are actually paying.

The flanker brands of the ‘Big 3’, Fido, Koodo and Virgin Plus have announced Cyber Monday deals for 2022. These are an extension of Black Friday deals, particularly the current free iPhone 11 with $45/50GB promotion. Koodo is offering up the iPhone 11 for $0/month on a 24 month Tab, to go with the $45/50GB […]
IIC Deals
20 hours ago