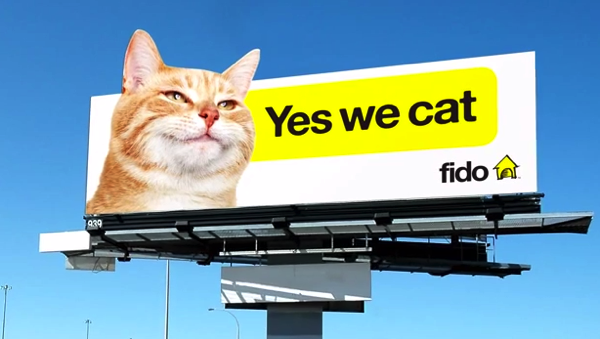 Fido has long had canines as its brand ambassadors but thanks to the explosion and popularity of felines on the internet, the wireless carrier has now switched gears, to debut a new animal—the cat.

The announcement was made on their YouTube channel and the new slogan reads ‘Yes We Cat’, a play on President Barack Obama’s ‘Yes We Can’ campaign:

We’ve been with our canine friends for many years but we’ve decided to make a big change. Check out the new Fido.

Personally, I’m not sure this is a good move since I really love dogs, but since cats are now taking over, I have no choice but to accept this move by Fido and jump on the bandwagon. This is what happens when you have the Big 3 ruling the majority of wireless airwaves in Canada.

By the way, if you haven’t noticed yet—this is an April Fools’ joke (kind of like yesterday’s Virgin Mobile SmartKicks footwear). Don’t believe anything you read on the internet today. Just don’t.