Rogers suffered a nationwide outage last Friday (that went well into Saturday; some into Sunday) that crippled Canada’s INTERAC network, along with emergency services, plus service for cellphone and home internet, and also enterprise customers.

The company stated it would be offering automatic service credits for the outage and now we can share what they consist of.

If your cellphone plan is $85 per month, then divide that by 30 and multiply it by two (for two days of outages). That works out to $2.83 in credit per day, so two days would be just under $6.

Is that enough compensation for the massive outage? 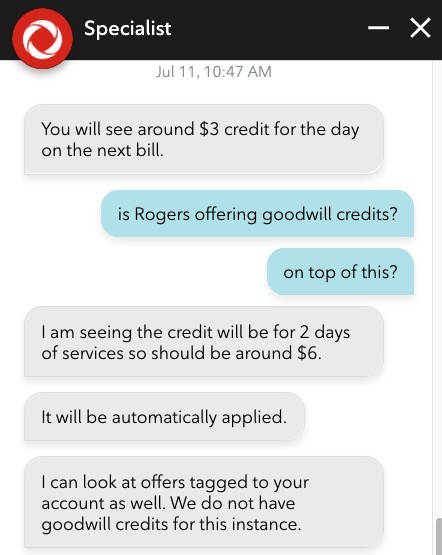 If you were expecting more credits than that, it doesn’t appear to be happening. The Rogers customer service agent said, “we do not have goodwill credits for this instance.”

In Q1 2022, Rogers saw its mobile phone average revenue per user metric at $57.25 per month. Two days of prorated credits at this price works out to $1.90 per day, or $3.80 total. Multiply this by roughly 10 million wireless customers, and that works out to an estimated $38 million in credits, if we’re using the ARPU metric.

Rogers had 8.91 million postpaid and 1.15 million prepaid wireless customers, as of March 31, 2022. The company saw combined wireless service and equipment revenue of $2.14 billion for the quarter.

Last April, when Rogers suffered a daylong service outage due to a software update blamed on partner Ericsson, the company similarly offered credits for the day, prorated.

You should also be aware of scammers targeting Rogers customers about credits for this year’s outage, similar to last year.

The Commission for Complaints for Telecom-television Services (CCTS) says it is an "independent agency that helps resolve complaints about telecommunications and television services from individual and small business customers, fairly and free of charge.” When consumers have a telecom complaint (phone, internet, cellphone, etc), an issue filed with the CCTS is usually resolved. In regards...
Gary Ng
5 days ago

Opensignal released its Canada 5G Experience and Mobile Network Experience reports on Thursday, showing insight into the Canadian telecom landscape yet again. From April 1 to June 29, 2022, Opensignal analyzed the 5G user experience from Rogers, Telus and Bell. When it comes to the top 5G download speeds in Canada, Bell and Telus again...
Gary Ng
6 days ago