Update Dec. 18: Rogers and Fido have extended this offer to existing customers to December 19.

It’s all about the wireless deals, baby. After Rogers and Fido launched a $60 promo plan with 5GB data and 5GB bonus data in BC and Alberta right in Telus and Freedom Mobile territory, it triggered a landslide of matching deals from all carriers and their flanker brands.

After Ontario was excluded from the original $60/10GB deal, Rogers has extended the offer to the province today. Users will get unlimited Canada-wide talk and text, access to Roam Like Home, plus the following:

The Rogers website fine print says the offer ends December 18, 2017, available to new or existing customers “who activate or upgrade to a non-share line on an eligible plan.”

Also, it now appears Rogers and Fido are no longer limiting the 5GB bonus data to 24 months, according to one memo posted to RFD: 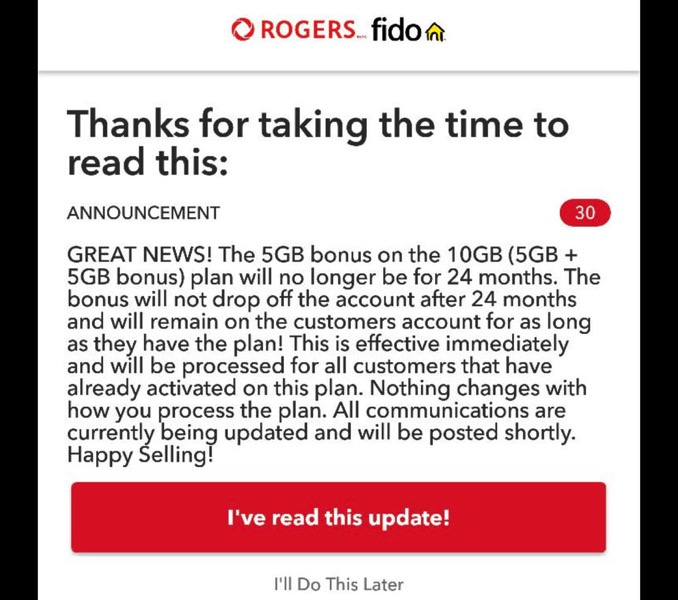 Another iPhone in Canada reader also confirmed the change:

ROGERS: New and Existing: The 5gb bonus stays on the account as long as you have the plan, does NOT expire pic.twitter.com/anY0zCspGV

The Rogers website here also no longers mention bonus data of only 24 months, so it looks like it’s now permanent. If you jumped on this Rogers/Fido plan when the 5GB bonus data was limited to 24 months, call in and double check your plan!

Best Buy is also advertising the launch of this $60/10GB promo plan in Ontario for Virgin, Koodo, Fido and Telus.

Don’t forget Freedom Mobile also launched a $50/10GB plan today as well with Canada/USA calling, to make another move against the Big 3.

What are you going to do? Holy smokes it’s been a crazy 48 hours in the wireless world. Competition (in AB/BC/ON) is possible thanks to Freedom Mobile.

Update: You can now change to this plan yourself by logging into your account on Rogers.com