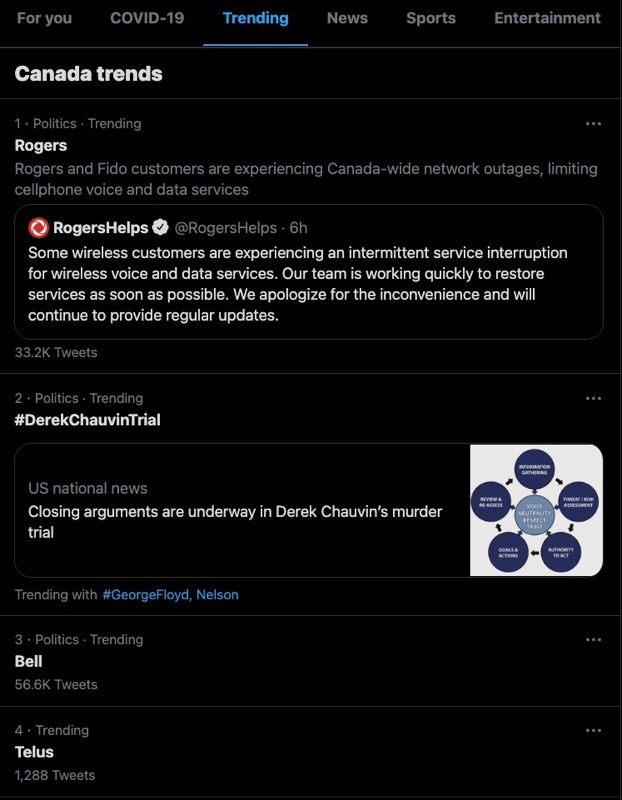 The Rogers wireless voice and data network went down for some customers starting last night and continued into the busy Monday morning work and school day, and currently is ongoing, affecting those on Fido, Chatr and also Zoomer Wireless.

Rogers has now provided an update on the outage less than an hour ago, apologizing for the wireless downtime.

“We sincerely apologize to our customers. We know connectivity is critical & are working hard to restore services for customers who continue to experience wireless interruptions. Residential & business wireline internet services aren’t impacted. We will continue to provide updates,” said @RogersHelps on Twitter.

The Rogers wireless outage has since become trending #1 on Twitter, as affected customers are unable to get cellular voice and data coverage.

According to recent charts from Downdetector, outages reported peaked at about 12,999 early in the morning, dipped below 9,750, then spiked again and have since remained constant, suggesting a fix hasn’t been completed yet.

#PRP wants to notify our community that @Rogers cellphone service is currently dealing with a Canada-wide outage. We want to inform everyone that if you call 9-1-1 and hang up, our communicators are unable to call back, so please stay on the line. #911Awareness pic.twitter.com/FWBPeh2mXs

Some users are having some fun poking fun at the outage as well:

Rogers is down and I’m over here like pic.twitter.com/C4Yxx4S03c

Me: I’m going to work from home this week and stay safe!

Me at home with Rogers Data and Bell FIBE WiFi:#rogersoutage pic.twitter.com/CmNp3ceC8X

We reached out to Rogers to ask why this wireless service outage is taking longer than normal to fix, but as of writing, we have not heard back from the company.

Rogers, Telus and Bell announced this week they will be waiving all long distance calls and texts made from Canada to Iran. The temporary waiving of charges depends on carrier, postpaid and prepaid accounts, with different end dates. “To help Canadians stay connected to loved ones, Rogers is temporarily waiving long-distance calls and SMS messages […]
Gary Ng
21 hours ago