Rogers Edges Out Bell and Telus for Best Network in Benchmarks 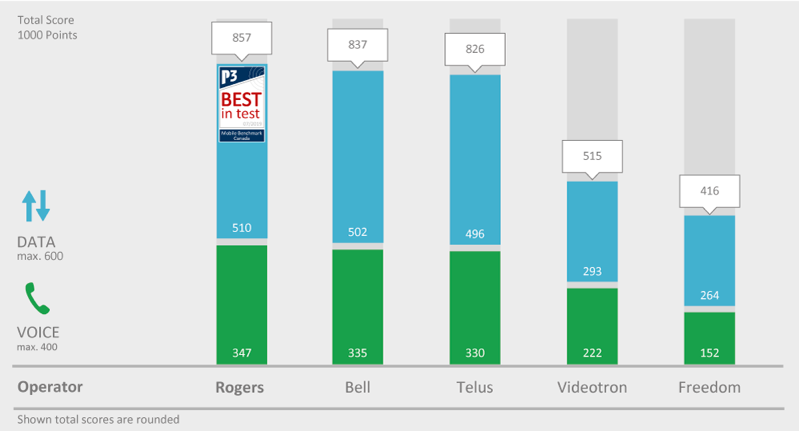 According to P3 Mobile Benchmark Canada, Rogers has the best voice and data network in metro and rural areas, edging out rivals Bell and Telus.

Rogers was named the overall winner with a Voice and Data score of 857 out of 1,000 points. Bell was close behind with 837 points and Telus with 826 points. Videotron scored 515 and Freedom Mobile at 416. Looking at the total scores, it’s a close race between the Big 3.

“Our unique testing and scoring methodology focuses on the customer’s network experience and covers a wide range of mobile services, including popular applications for streaming, social media and voice. We see Rogers ahead of the competition overall. This is particularly remarkable in a large country as Canada and shows that the operator is continuously investing in its network,” says Hakan Ekmen, CEO of P3 Telecommunication, in an issued statement to iPhone in Canada.

P3 says their mobile tests—covering 61% of the Canadian population—were conducted between May 6 and July 15, 2019, with their tests done via driving, walking and on rail. The walk tests were done in Vancouver, Calgary, Edmonton, Toronto, Ottawa, and Montreal.

The voice tests were made with phone calls while the data test browsed webpages, transferred files and watching YouTube in HD.

P3 is a global consulting, management and engineering services company, which expanded into Canada back in 2016. The company says it helps “serve the growing testing and network optimization needs of Canada’s mobile carriers and device manufacturers.”

In previous Canadian wireless network tests, Telus ranked above Rogers and Bell according to PCMag, Ookla and JD Power.