Apple’s iPhone XR, iPhone XS and iPhone XS Max are the first iPhone models to support Dual SIM and eSIM. The new feature allows an iPhone user to operate two lines at the same time through one physical SIM card and another digital eSIM.

In Canada, Bell is the only wireless carrier to support eSIM (along with their flanker brand Virgin), but last month Apple updated their website to add ‘eSIM’ as a feature for Rogers and Fido—a move which gave many customers hope about trying out Dual SIM.

But now it looks like Rogers eSIM support may be delayed, as the Apple “Wireless carrier support and features for iPhone in the United States and Canada” page was updated recently to remove mention of eSIM for the wireless carrier.

Check out the side-by-side screenshots below, showing the wireless features from Rogers and Fido. You’ll notice eSIM is gone from the Rogers feature list: 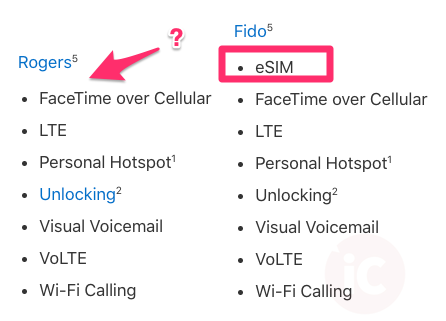 Apple launched Dual SIM support with the public release of iOS 12.1.1. With eSIM, you can easily add a data-only plan to your iPhone when travelling via services like GigSky, which recently supported the feature.

While Rogers no longer has eSIM listed on Apple’s website, their flanker brand Fido still does. Recently, some iPhone in Canada readers have teased screenshots of eSIM apparently working on Fido, but we have not verified this yet, so take it with a grain of salt:

As for Fido, their social media accounts have said there is nothing to announce on eSIM yet, which is also the case when we previously reached out to Rogers PR.

At this time, you can only use a physical SIM card for your Fido line and the eSIM can be used for another plan with another carrier. -Jo

Bell says it’s not possible to transfer an existing physical SIM line to eSIM on iPhone, but some customers have been able to do so by following these instructions.

If you’re a Rogers customer looking forward to eSIM on the newest iPhones—you may be waiting a bit longer for support.

The evidentiary portion of the Competition Bureau's federal Competition Tribunal hearing against Rogers and Shaw over their proposed $26 billion merger came to a close on Thursday, following 18 days of testimony, parades of witnesses, and strenuous cross-examination (via The Globe and Mail). Oral arguments from the two sides are scheduled for December 13 and...
Nehal Malik
19 hours ago