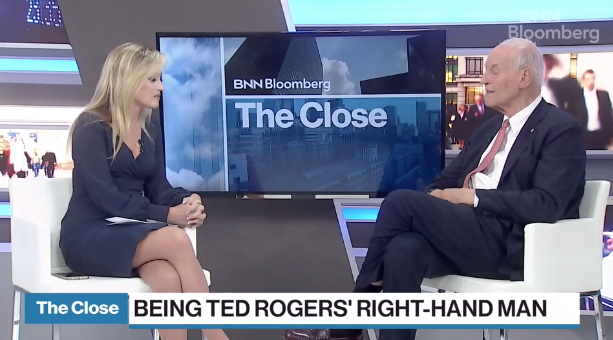 The federal government is undergoing a security review of 5G networks and has yet to decide whether or not to ban China’s Huawei, like its allies in the U.S., New Zealand and Australia, over fears of espionage.

“Huawei is cheaper and quite sophisticated. But the fact is, they’re very, very close to the Chinese government. So for anyone to argue that they wouldn’t be compromised if the government said, ‘do this’ – they’d do it. They have to do it. They’re in that country,” said Lind in an interview from Wednesday.

Rogers has chosen to work with Sweden’s Ericsson for 5G, a decision made in 2018, whereas rivals Telus and Bell currently have 4G hardware from Huawei. A Canadian ban on Huawei would potentially mean an expensive cost to replace existing hardware for both companies.

“The idea of Huawei controlling – or potentially controlling – our communication system in Canada is crazy. I don’t think they should be allowed to,” said Lind to BNN Bloomberg’s Catherine Murray.

Earlier this month, the U.S. placed a ban on Huawei, cutting the Chinese company off from American software and hardware manufacturers.

Lind emphasizes both Republicans and Democrats in the U.S. are saying Huawei is a national security threat, and with that in mind, Canada should pay attention to its southern neighbour’s warnings.

“If it was just President Trump, that’s one thing. But if you’ve got Democrats as well saying ‘no deal,’ then I think we’ve got to listen. We should listen,” Lind said.

As for evidence of Huawei’s close ties to the Chinese government, Lind points out the retaliation of China was swift and heavy-handed against Canada, after Huawei CFO Meng Wanzhou was arrested in Vancouver on behalf to the United States. China has detained two Canadians in the country, while also banned exports of Canola and pork from Canada.

“I mean, why does the Chinese government get so excited about this? Why? Because they’re very, very close to Huawei,” Lind concluded.

Lind is a Rogers veteran of nearly 50 years, known as the right-hand man to company founder Ted Rogers. He was also on BNN Bloomberg last fall, where he argued Canadian wireless carriers have to consolidate, while also promoting his memoir Right Hand Man: How Phil Lind Guided the Genius of Ted Rogers, Canada’s Foremost Entrepreneur.

Update: clarified Lind is vice chairman and not an executive in our title as originally stated.

Rogers’ proposed $26 billion takeover of Shaw Communications, if successful, could deliver a $216 million payday to 12 hedge funds that bet on it — reports Reuters. The controversial and heavily contested merger has a January 31 deadline. With the Federal Court of Appeal rejecting the Competition Bureau’s appeal of the merger on Tuesday, Rogers and...
Nehal Malik
17 hours ago