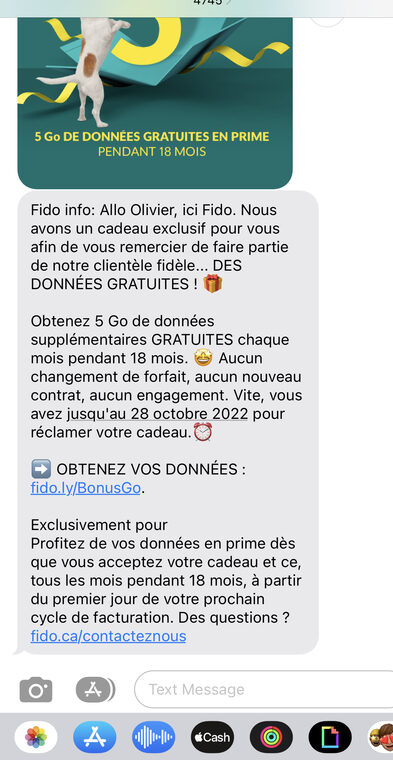 Rogers and Fido appear to be offering up another 5GB of free data, but for 18 months. That’s according to Fido customers that shared screenshots of the text messages sent out by the wireless carrier on Wednesday.

According to the text message, Fido says this exclusive gift is a thank you for being a loyal customer. The message says no plan change, no new contract and no commitment is required to get the freebie. Customers have until October 28, 2022, to claim the free offer.

Fido says the free 5GB data once accepted will kick in on the first day of your next billing cycle. Users are directed to a link that sends them to the Fido website to sign into their accounts to access the offer.

Other RFD users said the same offer was also sent out from Rogers.

Last October, Fido sent out the same 5GB free data offer but it was only available for 15 months and for “great customers”.

You may want to check your text messages to see if you received this free 5GB data offer from Rogers and Fido. Get anything?

The evidentiary portion of the Competition Bureau's federal Competition Tribunal hearing against Rogers and Shaw over their proposed $26 billion merger came to a close on Thursday, following 18 days of testimony, parades of witnesses, and strenuous cross-examination (via The Globe and Mail). Oral arguments from the two sides are scheduled for December 13 and...
Nehal Malik
49 mins ago