Rogers has offered up a Boxing Week sale on Apple’s 64GB iPhone 8, offering it for $0 on a two-year Premium+ Tab plan, saving users $229 up front. A similar price cut was last seen during the company’s Black Friday promos. 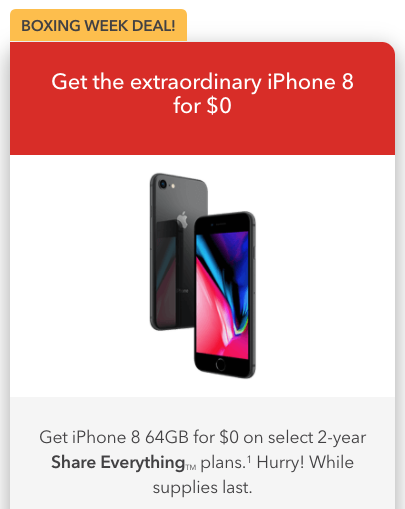 Now, the bad news is a Premium+ Tab Share Everything plan starts at $95 per month and only 1GB data and 300 local minutes. However, a current promo by Rogers does offer 2GB of bonus data per month, for 24 months.

Here are some other iPhone Boxing Week offers from Rogers:

The discount on the entry iPhone 8 by Rogers looks to be a move to match Shaw’s Freedom Mobile, which currently offers the same phone for $0 on contract, but at $65 per month, $30/month cheaper than its incumbent rival.

As of writing, Telus and Bell still have the 64GB iPhone 8 priced at $229 on a two-year term, but expect them to match Rogers soon, right?

After seeing Rogers, Telus and Bell offer $60 per month promo plans with 10GB data, anything else just pales in comparison.

There’s no word whether we’ll see the $60/10GB plan return anytime soon, but do note it still remains in the system on Telus, but can’t be offered to customers.