Rogers Prices Jumping $5/month for Some Legacy Plans in August

Rogers appears to be increasing wireless plans again, this time by $5 per month for some users with grandfathered plans, such as the 6GB data plan for $30.

According to iPhone in Canada reader Chris, Rogers sent him the following letter last week informing him of an upcoming bill change.

He explains: “I’m on the old 6GB/$30 plan and got this in the mail today. So my total bill is gonna increase to $72 a month from $67 including shared data on an iPad.” Chris says despite the “annoying” increase, his older price plan is still  a “good deal”. 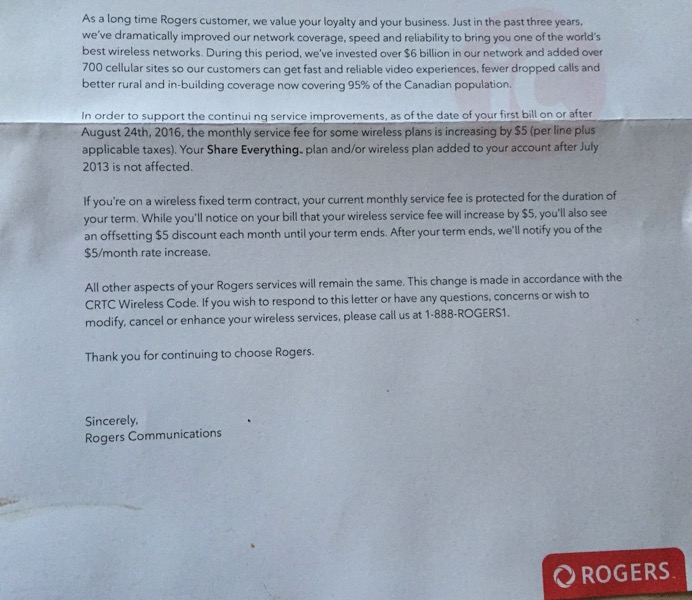 The Rogers letter explains, “In order to support the continuing service improvements, as of the date of your first bill on or after August 24th, 2016, the monthly service fee for some wireless plans is increasing by $5 (per line plus applicable taxes).” Share Everything plans and/or other wireless plans added to accounts after July 2013 are not affected.

Rogers explains those on older fixed contracts are protected from price changes, but their bills will see a $5 increase, to be offset by a $5 discount until their term ends. Once your contract expires though, bills will increase by $5 per month.

Back in January of this year, the Big 3 increased wireless rate plans by $5 per month, “because they can”, according to Internet advocates OpenMedia.

Anyone else receive this letter? What do you think about this $5 per month increase to continue and support the expanding Rogers network?