Rogers Throttles Internet More Than Any Company on the Planet

Turns out Rogers is officially the world’s worst internet throttler based on research derived from the initiative known as the Measurement Lab (MLab), backed by Google. Results of the study reveal that based out of all the internet providers on earth, Rogers throttles internet more than any other ISP out there, notes TorrentFreak. As we’ve covered before in the past, internet speeds mean a lot to Canadians.

These results were based on data derived from Q2 2008 to Q2 2010. Out of all tests, Rogers internet traffic showed the most evidence of Deep Packet Inspection (DPI).

Here’s the breakdown of the percentages by year of throttled Rogers traffic:

So more than three quarters of Rogers internet traffic remains throttled, with no end in sight based on the data above. Compare this to Videotron, with only 3% of traffic slowed down in 2010 Q1. 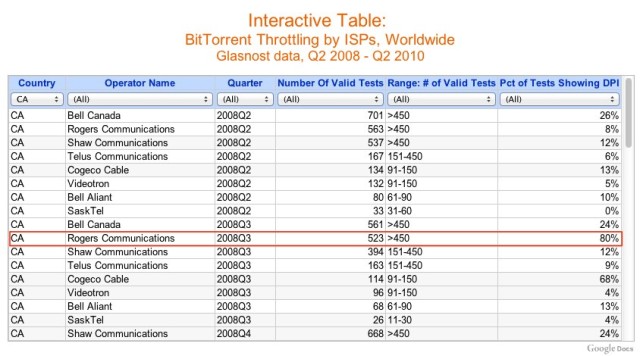 High-volume, low time-sensitive traffic (such as P2P file sharing) is
limited to ensure all customers have a high level of service for
time-sensitive tasks like sending email, requesting web pages, video and
voice applications.

One U.S. researcher, Milton Mueller from Syracuse University told the CBC Rogers throttling could be in breach of Canadian net neutrality rules:

“Under the regulations that the CRTC promulgated for reasonable internet traffic management practices, I think 100 per cent, 24/7 throttling is not conformant…

Rogers responded to the CBC with that its network management “is in full compliance with CRTC regulations”.

Are you a Rogers internet customer? Have you experienced throttled internet speeds?