Almost three years ago Rogers and Fido released their My Account iPhone app to allow customers to check account balances, track wireless voice and data usage and change My5 or My10 numbers.

The apps require a data connection to authenticate your account, but lately it appears both apps are not working for customers, giving messages of “authentication” errors even though users are connected to data (even without Onavo profiles installed).

Below are images of what Rogers and Fido users are seeing (thanks @YVRBCbro for the Fido image): 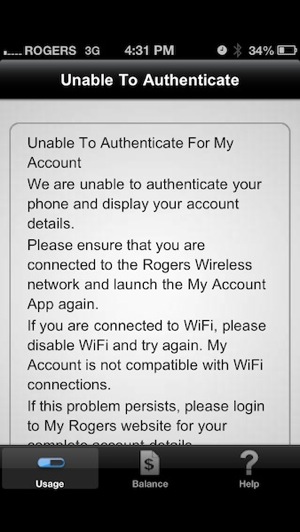 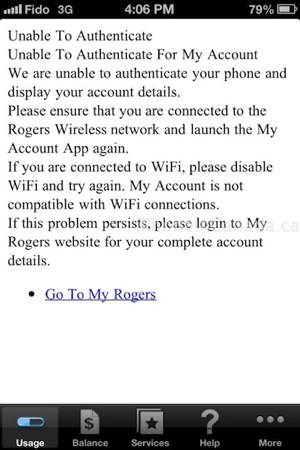 Numerous customers have complained about the lack of updates for the apps in iTunes, giving both apps an average rating of 2.5 stars out of 5. The most recent Rogers My Account update was more than two years ago in July of 2010. The Fido My Account app was last updated in July of 2011.

Some users that have run into the authentication error have noted they have two lines tied to accounts, which could be what’s causing the issue.

Do these apps work for you? Have you experienced the “unable to authenticate” error lately?