Koodo Mobile kickstarted the $45 BYOD promo plan with 1GB data and unlimited Canada-wide calling and SMS/MMS. Virgin Mobile and Fido followed suit as expected but these plans aren’t exactly the same. Fido’s offer doesn’t include voicemail (you have pay $5 for it) or international text messages, but Koodo does.

According to RedFlagDeals, it is possible to get the same plan from Fido but have it include Voicemail 3 and unlimited International text messages. Forum user Rudyyy says users need to call in and ask reps for plan ‘FPMMM014G’, which is summarized below via an email confirmation he received: 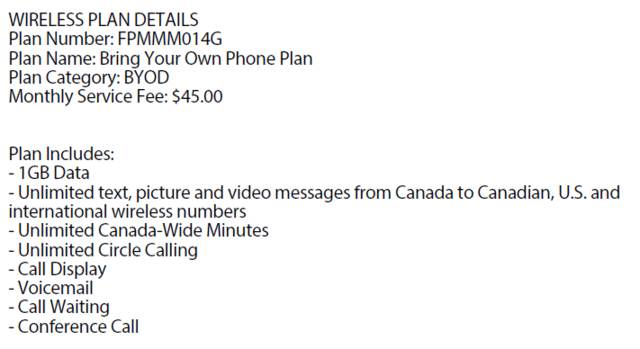 Again, your mileage may vary but this plan was acquired by calling into Fido’s regular customer service line. As carriers prepare for the ‘double cohort’ to be freed on June 3, 2015, it looks like they may be offering a few extra incentives to sign up customers. Let us know if you’re successful in getting this plan.