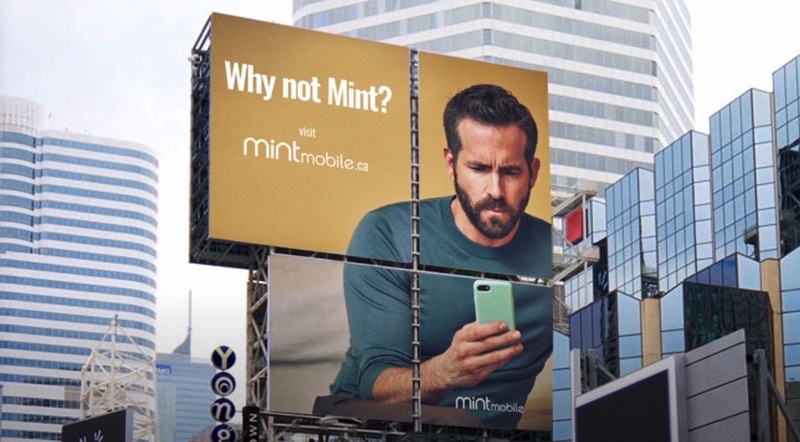 Sadly, MVNOs like Mint Mobile are not able to operate in Canada. Back in September 2020, Reynolds said he was “trying” to bring Mint Mobile to Canada.

Now, Reynolds has purchased a billboard in downtown Toronto on Yonge and Edward (one block north of Yonge-Dundas Square), asking “why not Mint?”, sending visitors to mintmobile.ca.

The Mint Mobile website reads, “and now a few words from our acting VP of Canadian billboards,” then shows the following 30-second video clip featuring Reynolds.

“Hello, thank you for your interest in Mint Mobile. Many of you have asked why Mint Mobile isn’t in Canada—and that’s a great question,” explains Reynolds.

The Mint Mobile website then includes a link to “find your representative here and please be nice”, directing Canadians to contact their Members of Parliament. It’s unclear if Reynolds and his followers will be able to out-lobby Canada’s wireless incumbents.

Back in April, the Canadian Radio-television and Telecommunications Commission (CRTC) issued a ruling on mobile virtual network operators (MVNOs), which it said would “enable further competition in the marketplace.”

But critics of the plan called it “toothless”, citing how it would only maintain the status quo, as it only allowed for existing regional operators with purchased spectrum and facilities to participate.

Earlier this year, Mint Mobile offered a promo ‘Bobby Bonilla’ plan, offering 25 years of the wireless service with 4GB of 5G/4G LTE data for a one-time payment of $2,500 USD. The somewhat half-hearted idea resulted in 124 new members signing up for the plan, when Reynolds says they expected “like 4 people”.