The total value of the 25 Best Canadian Brands is C$72.8 billion, up 4% compared to 2012, and Telus has heavily contributed to it, posting the biggest growth in brand value over the past two years compared to rivals Rogers and Bell.

According to Interbrand Canada’s fifth biennial Best Canadian Brands report, Telus has reached the 10 best Canadian brands list by growing 46% in brand value compared to 2012. The country’s second-largest wireless player is currently valued at C$2,9 billion. As a result, Telus has surpassed an important brand value mark, and it is now the tenth-most valuable Canadian brand.

By contrast, Bell, which ranks sixth on the list published today by Interbrand, grew by only 9%, while Rogers (previously ranked as No. 10) advanced to the eighth place by posting a 6% growth.

Canada’s most valuable brand is TD, followed by RBC, while Thomson Reuters dropped to the third place. 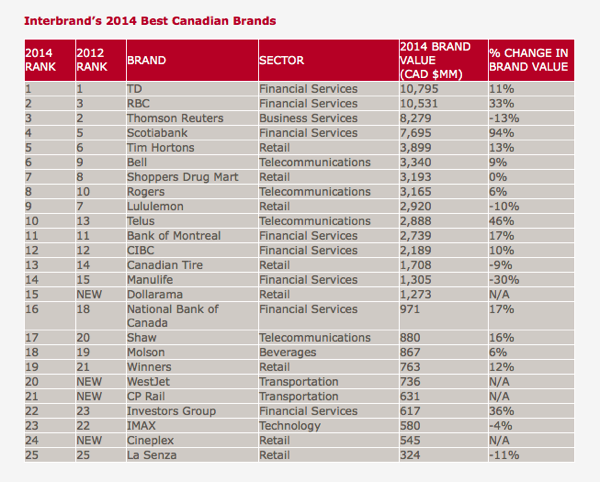 To be included on Interbrand’s list, companies are subjected to multiple criteria, and one of them, of course, is to have originated in Canada. The list is then compiled based on three key components: financial analysis, role of brand, and brand strength.