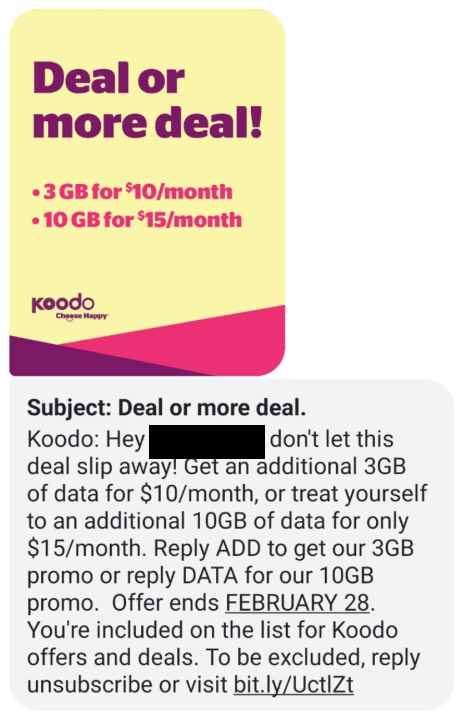 Image: Remik/RedFlagDeals
Koodo subscribers who wish they had a larger data bucket may be in luck this week, as the carrier has a new promotion offering $10/3GB and $15/10GB data add-ons to select customers on select plans via text message.

Eligible customers can reply to the Koodo text message with ADD for the 3GB add-on or DATA for the 10GB add-on through February 28.

Koodo has offered similar promotions via text message in recent months, but it’s unclear how many customers are notified or how eligibility is determined. Results are mixed based on a discussion in the RedFlagDeals forums.

In related news, iPhone in Canada yesterday confirmed that Koodo has “no plans” to raise the price of its $60/10GB promotional BYOD plan.

Did you get this Koodo text message? Let us know which province you live in.

Rogers, Telus and Bell announced this week they will be waiving all long distance calls and texts made from Canada to Iran. The temporary waiving of charges depends on carrier, postpaid and prepaid accounts, with different end dates. “To help Canadians stay connected to loved ones, Rogers is temporarily waiving long-distance calls and SMS messages […]
Gary Ng
7 hours ago