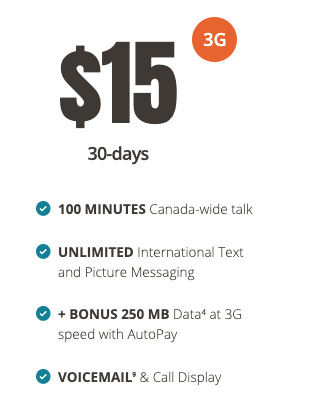 This plan launches today, March 15, and includes the following details:

Setting up pre-authorized payments via Autopay results in a $2 monthly discount plus 250MB of data, taking this plan down to $13 every 30 days.

This plan from Public Mobile differs from a similar $15 offering from Rogers prepaid brand chatr, however. The chatr offer includes unlimited incoming calls, unlike this Public Mobile plan. However, the chatr offering only has 100 Canada-wide minutes.

At $13 per month, this plan might be a good starter plan for your kid, or a senior or anyone who doesn’t use their cellphone frequently.

Public Mobile recently rolled out a $23/1GB 3G data plan with unlimited Canada-wide talk and text after Autopay. Also, some Public Mobile users have been targeted with a $50/8GB plan if you opt to switch to Koodo Mobile.

New customers signing up to Public Mobile who activate online can get $25 in credit by signing up under a referral until March 31 (update: extended). Email tips @iphoneincanada.ca if you require a referral.

Torontonians and experts are once again calling for Rogers, Bell, and Telus to provide underground cellular service on the Toronto Transit Commission (TTC) subway amid an uptick in violent incidents, including stabbings, armed robberies, and assaults, on the line in recent months — reports CityNews Toronto. In 2012, BAI Communications won a 20-year, $25 million...
Nehal Malik
8 hours ago