TELUS has announced it has launched new Cuba Travel Passes for its customers who are set to embark to the popular sun destination.

For example, customers travelling to Cuba can get 50 text messages, 50 minutes of voice and 50 MB of data for only $40, in comparison to spending approximately $600 with pay-per-use rates. See more Cuba Combo Pass options below. 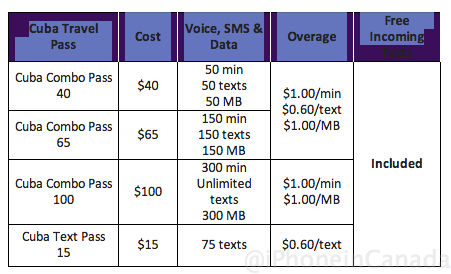 Despite theses new travel passes, the bottom line is if you want to roam while on vacation in Cuba it is going to cost you. TELUS says users can track their data usage and costs in real-time via the previously announced Telus Travel Tracker web page.

Earlier this week Bell lowered its roaming rates to Cuba as well.