Canada’s No. 2 wireless player has just jumped into the future: Its employees won’t need key cards anymore to access the building. They will use their NFC-enabled smartphones to gain access to the office (via GigaOm).

As a result of the partnership with UK-based security software developer Intercede and SIM card maker Gemalto, Telus is the first carrier to put its employees’ security credentials on the SIM card of their smartphones, which allows them to enter the building just like they do with a badge. The only thing that employees need to do is download Intercede’s MyID app to their smartphone.

The company sends either a text message or an email to the employee, with a prompt to download security credentials from the phone. That download will verify the employee’s identity against the information in his or her SIM card and then install a Java Applet into the module, which acts as their keycard going forward. The phone’s near-field communications (NFC) chip becomes the pass-through mechanism to a building’s contactless locks.

And this means that the door is open and the employee is welcome in the building. But this is just the start, Intercede’s VP of Business Development, Peter Cattaneo, said to GigaOm. If a biometric sensor (see iPhone 5s) is on the smartphone, the system can be used to make sure the person holding the device is authorized to access the office or, in another scenario, the corporate intranet or email server. 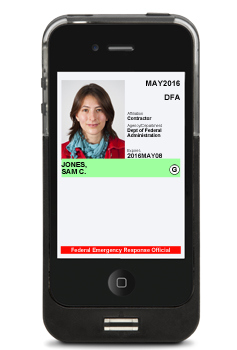 However, there are certain technical limitations: First, the employee must have an NFC-enabled smartphone. Secondly, iPhone compatibility is out of the question — unless the company is able to provide its employees with NFC-enabled cases.