The company’s website explains why these charges are being implemented—due to monthly data allowances being exceeded by a small number of users.

The culprit according to the company? Consumption of video on the Internet by less than 5% of its users which account for 25% of data used on their network:

As high speed networks have evolved, however, the consumption of video over the Internet has dramatically increased. As a result, in the last 16 months alone our customers’ monthly Internet data usage has more than doubled. Further, much of this consumption is being driven by a minority of our customers – in fact, less than 5% of our Internet customers are consuming 25% of the data on our network in any given month. This has required us to reconsider our approach to ensure we continue offering a smooth and seamless Internet experience for all customers.

Accordingly, TELUS will begin applying clear and simple usage-based Internet charges for customers who go over the data allowance in their Internet data plans.

These usage charges have been designed to ensure the amount a customer pays for Internet service reflects their actual data consumption. You pay for what you use. Most TELUS customers are already on an Internet plan that meets their data usage needs, and will not incur an additional charge.

Company spokesman Shawn Hall explained why TELUS made the change to the Vancouver Sun with the following:

“The usage charges allow us to continue to support the investment required to meet growing demand for Internet data without impacting the majority of customers who stay within their monthly data allowance,”

TELUS says the changes will be phased in from the end of March to July 2015; customers will be notified by phone and mail if they are exceeding their usage allowances.

Email alerts will be sent out when users reach 75%, 95% and have exceeded their data buckets, listed below: 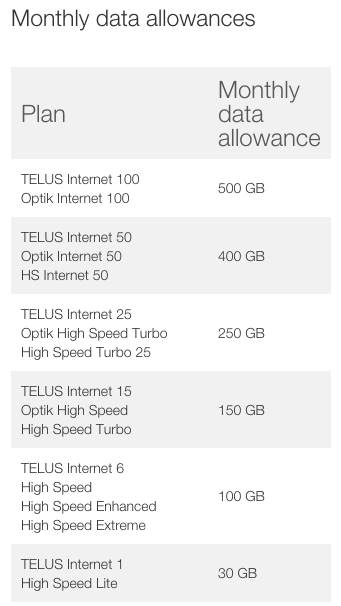 What if you go over your monthly data bucket? You’ll be charged the following overage rates, which TELUS says “are among the lowest in Canada”:

For Optik TV customers, watching TV does not count as data, but apps such as Netflix, TED Talks, Weather Network and more do.
Are you a TELUS Internet customer? What do you think of these changes?