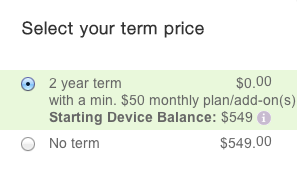 If this trend continues for older iPhones, when your two year iPhone 4 contract is up, you could be in line for a $0 iPhone 5 on another two year term if things start to change?

The rest of the wireless world that offers subsidized pricing on iPhones are linked to two year contracts, but in Canada they have always been three years. 36 month contracts were noted as one of the top complaints by Canadians when the CRTC asked for public input regarding its wireless code consultation.

Could this be a sign of things to come for consumers? Shorter contract terms for subsidized iPhones?

Update: A refreshed iPhone 4S can be had for $0 on a two year term as well (thanks gtasscarlo):