Quebec wireless carrier Videotron launched Wi-Fi Calling and VoLTE for customers with an iPhone 7 or newer in February 2018, as part of the company’s 31.1 carrier update for Apple iPhone users.

Now, it appears Videotron has launched Wi-Fi Calling and Voice over LTE (VoLTE) for older iPhone users, with the latest 36.1 carrier update.

Wi-Fi Calling lets you “make or receive a phone call if you have a Wi-Fi connection in an area with little or no cellular coverage,” according to Apple. With VoLTE, users can make voice calls over LTE instead of 3G, enabling higher-quality audio.

According to iPhone in Canada reader Jean-François, he says he received a carrier update on his iPhone 6s on Sunday, allowing him to enable Wi-Fi Calling and VoLTE. He was required to call into Videotron to enable the settings.

Check out his iPhone 6s screenshot below, showing Wi-Fi Calling enabled on his device while connected to Videotron: 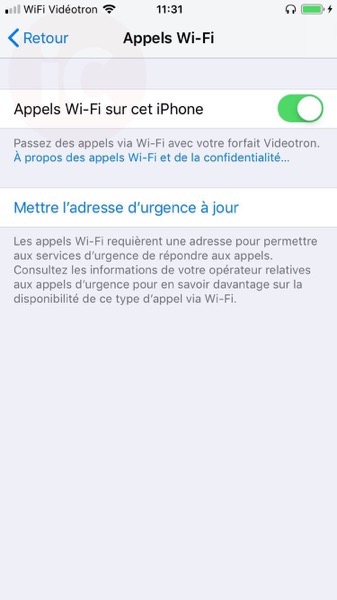 Let us know if you received this Videotron carrier update and if you were able to get Wi-Fi Calling and VoLTE on your older iPhone.