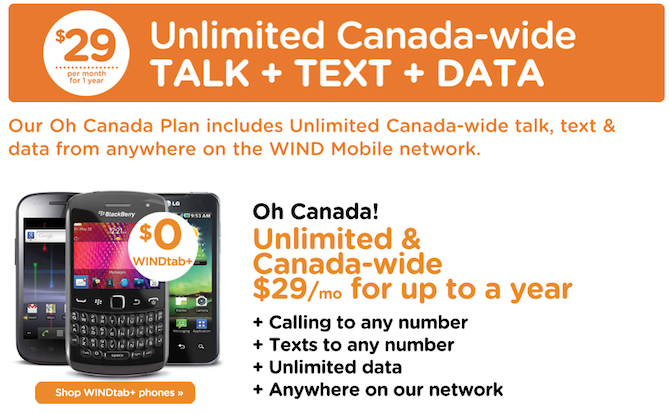 Image: An example of the power of Wind Mobile.

WIND Mobile’s billionaire backer, Egyptian Naguib Sawiris, noted in an interview yesterday with the CBC’s The Lang & O’Leary Exchange that he regrets entering the Canadian mobile market as “it was a bad idea”. Boy, did he ever speak his mind:

“You need to ask yourself, why isn’t Rogers in the U.K., like Vodafone or France Telecom,” he said.

“Why aren’t they everywhere if they’re so good? The answer is simple, here they’re protected. They can be inefficient, their cost structure can be expensive.”

‘We are trying to help [consumers] and not because we are good guys — because we want to make money.’

“Why would an Egyptian like me be in 25 countries, and a big company [stay] here? Because they’re pampered,” he said. “How can you create innovation if you close up yourself like that? What’s the argument? I don’t see it.”

Rogers senior VP of regulatory affairs, Ken Engelhart, responded and dismissed the allegations his company was inefficient. He noted Rogers operated cable in the U.S. prior to selling off that division to concentrate on wireless:

“The fact that we are very efficient is one reason why I think [Wind] and the other new entrants are finding it so difficult to compete in Canada.”

Sawaris has threatened to boycott the next wireless spectrum bidding unless the federal government sets aside some licenses for new entrants, and has started to discourage others from investing in Canada:

“Anybody who asks me, I tell him, ‘Look, we are the stupid investors that poured a billion dollars into Canada here and created 1,000 new jobs, please don’t do this mistake. Don’t come here,’” Mr. Sawiris said. When asked whether he regretted his decision, he added, “Totally. I would actually, if they would give me my money back, minus 10 per cent, I would take it any day.”

WIND Mobile’s intricate ownership alignment shows control by Canadian equity owners but its initial launch was backed by 80% funding from parent company Orascom, owned by Sawiris. Even though the ‘Big 3’ telcos in Canada complained to the CRTC against this foreign ownership structure, WIND Mobile given the green to launch in December 2009.

Since then, the company has amassed 317,000 subscribers (45,000 added last quarter), but it pales in comparison to the combined 23.5 million combined subscribers of Rogers, Telus and Bell. But there’s hope. Orascom recently merged with VimpelCom, a massive Russion wireless company that brings the combined total number of customers to 200 million worldwide.

Sawiris notes WIND helped lower cellphone prices in Canada by an average of 30 percent. He also mentions there’s no real competition here as the ‘Big 3’ all have similar revenue numbers coming from each user.

Sawaris nailed it. There is no innovation or competition here. Coming off my three year contract with Rogers, my research for a new monthly plan shows a minimum of exactly $70 per month for any voice plan plus 6GB data plan from either Rogers, Telus and Bell. I find it odd the plans are all similar in nature down to the included minutes and features.

Every time we see one carrier introduce a plan or price change–the others quickly follow suit. Just look at the 6GB data plan as an example. Marketed as a ‘promotional offer’, it just keeps on coming back time and time again.

Will the iPhone Ever Come to WIND Mobile?

WIND Mobile’s Chairman, Anthony Lavacera had this to say back in August when asked about the absence of an AWS-supported iPhone:

GOB: Are you satisfied with your handset selection – and what are your thoughts on the next iPhone or the Google/Motorola Android handsets that will come soon?

AL: That’s a two-hour discussion right there. On the handsets, no, we’re not satisfied. AWS is a problem for handsets. We don’t have the same selection. It is widening and we have enough, but the range is not as wide as we would like it to be. And of course on the iPhone question, AWS is not supported by the iPhone. We’ll see what happens with iPhone 5, which looks like an October time frame for its release, but I’m not holding out any hope.

He followed up his thoughts on the iPhone in early November. It appears Android is keeping users occupied:

“The adoption of Android that we can see is beyond explosive, so we’re quite encouraged. Six months ago if you’d asked me, I would have said that we look forward to Apple making the iPhone 5 available on AWS. Today, I would say it’s much less important to us as consumers are really jumping at high-end Android phones from a number of manufacturers.

If an iPhone is launched to support the Advanced Wireless Services (AWS) spectrum WIND Mobile (and Mobilicity, Public Mobile, Videotron) operates on, all I have to say to the ‘Big 3’ telcos is–watch out. That’s the only thing stopping Canadians from jumping ship and ditching your services (that and our lengthy three year contracts).

What do you think? Do you agree with the arguments of Sawaris?