Best Buy has Apple First-Gen AirPods on Clearance for $199.99 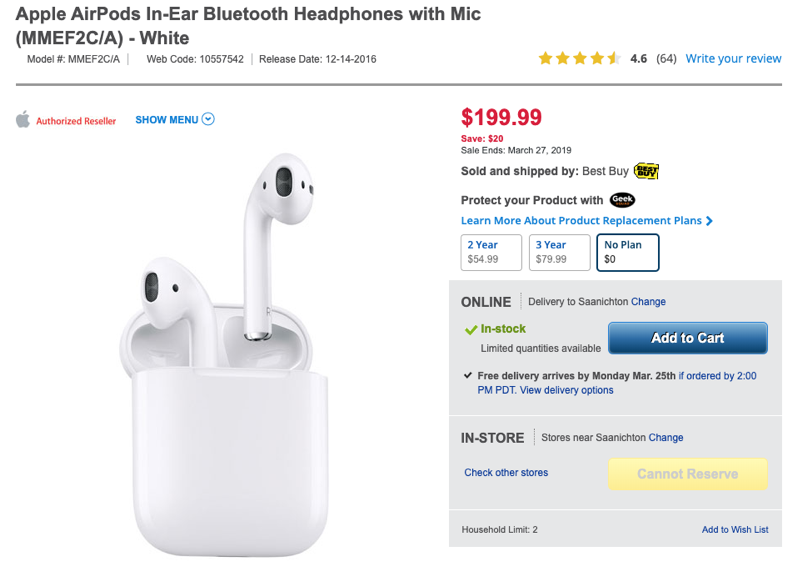 If you’re not ready to drop some coin on AirPods 2, which retails for $269 CAD with the new Wireless Charging Case, you can save on the original AirPods over at Best Buy Canada, as they are now on clearance for $20 off at $199.99. As of writing, stock is showing as available online with free shipping.

Apple has AirPods 2 available with the regular charging case for $219.99. You may be better off spending an extra $20 to get the latest 2019 technology:

Powered by the all-new Apple H1 headphone chip, AirPods deliver a faster and more stable wireless connection to your devices — up to 2x faster when switching between active devices, and a 1.5x faster connection time for phone calls. The H1 chip also drives voice-enabled Siri access and delivers up to 30 percent lower gaming latency. So whether you’re playing games, listening to music or enjoying podcasts, you’ll experience higher-quality sound.

But if you’re all about saving money, then the first generation AirPods are still an option for now (your kids won’t care as long as they have a pair to ‘flex’ with).

Amazon has launched an expanded sale on a variety of its devices, slashing the prices on Echo, Fire TV, Kindle, Blink products and more. These sales come after Amazon announced new products last week. Check out the full list of devices on sale below, which now includes Ring and Blink doorbells and cameras: Fire TV […]
IIC Deals
4 mins ago