How to: iPhone Speedtest – 3G vs EDGE vs WiFi

When I first tasted the speeds of 3G wireless data my mouth salivated like Pavlov’s dog. After playing around with an iPhone 3G test unit at the Rogers dealer inside Tillicum Mall in Victoria, I was impressed with how quickly Safari was loading web pages. Waiting at red lights in the car has become even more enjoyable than ever before. Sometimes I wish they’d never turn green (note to self: replying to emails/twittering/chatting while driving=dangerous and stupid)!

When Apple first announced the iPhone 3G they claimed that 3G was approximately 2.4x faster than EDGE. I decided to put 3G vs EDGE to the test, and while at it throw in WiFi as a comparison too. I used DSL Report’s iPhone Speedtest for this tiny experiment (read here for top 5 iPhone tips for newbies).

Loaded up the speedtest webpage using 3G, EDGE, and WiFi. Here are the results: 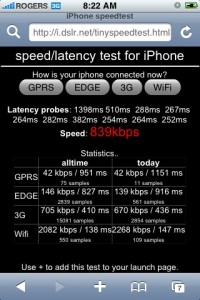 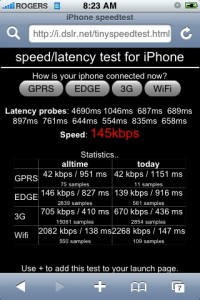 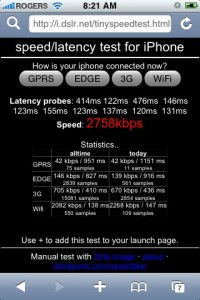 The included statistics help compare your speeds versus others who have also completed the speed test. Looks like 3G on Rogers is above the Speedtest all-time average.

As you can see from my results, the iPhone at 3G speeds is roughly 5.7x faster than EDGE on the Rogers network, well above Apple’s promise of 2.4x faster. 3G is about 1/3 the speed of my WiFi network at home. Definitely give the speedtest a try and see how your speeds are. Anyone else getting faster speeds than the ones I’ve experienced? Let’s hear your speeds folks!

PS – Don’t forget to enter my FREE contest/giveaway for a set of Helium Digital Boombuds!