Apple has released iOS 6.1.3 which contains improvements and some bug fixes, in particular the lock screen passcode flaw which enabled access to the phone app. Other fixes include improvements to maps for Japan. This looks to be a minor upgrade, no word on whether battery improvements are included but we’ll find out soon enough. 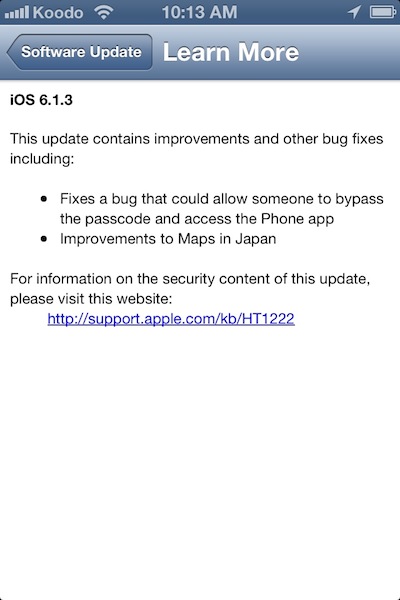 You can download iOS 6.1.3 by going to Settings > General > Software Update from your iOS device.

iOS 6.1.2 beta 2 was released in late February to developers and contained the aforementioned changes. If you’re jailbroken, stay away from iOS 6.1.3, as it is reported to likely kill the evasi0n jailbreak.

IOS 6.1.3 is out.Jailbreakers stay away!There’s no coming back to 6.1.2 JB even if you saved blobs (except iPhone4 and ipt4g)