iOS 10 Now Installed On The Majority Of Compatible Devices

This week Apple released the first official information on iOS 10 usage since the mobile operating system first dropped in September. The data reveals that more than half of iOS 10 compatible devices are now running the current generation software. 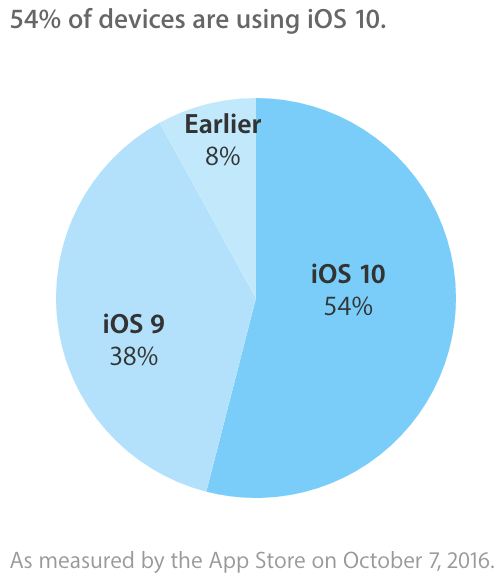 Announced through an update to Apple’s developer website, iOS 10 now runs on 54 percent of iPhone, iPad, and iPod Touch devices measured through the App Store as of October 7.

While Apple’s information is interesting, it may be a bit conservative. According to mobile marketing firm Fiksu, and first reported by 9to5Mac, iOS 10 is installed on 66.7 percent of active devices, roughly a month after the OS launched. This would mean that Apple’s newest mobile operating system has seen faster adoption than any other iOS version.

An interesting thing to note is that early adoption of iOS was fairly slow-going in the first two weeks of its launch – slower than iOS 6 through iOS 9. Toward the end of September, however, downloads quickly jumped up.

This is quite an unusual pattern in terms of upgrading mobile operating systems among Apple’s user base, as it usually doesn’t spike quite so sharply. Between September 27 and October 4, iOS 10 adoption increased 20 percent.

“We’ve never seen this kind of acceleration in the adoption curve for an iOS upgrade,” said Tom Cummings, VP New Market Strategy, Fiksu DSP. “After a lackluster first two weeks, a combination of increased emphasis by Apple and improved user confidence in iOS 10 is pushing adoption rates to new heights. It is likely that users were hesitant to update to iOS 10 during the initial weeks as news of bugs and malfunctions surfaced.”

Have you installed iOS 10 on your device, and, if so, how do you like it?