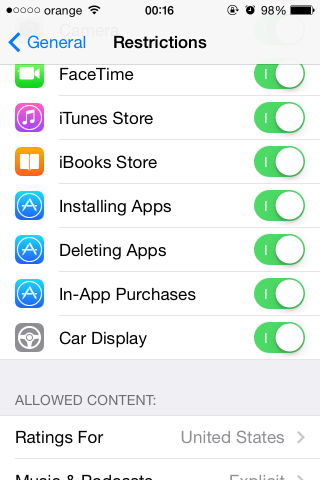 Apple released iOS 7.1 beta 2 for developers today. The first major change that was spotted by 9to5Mac was that this version includes a toggle labelled “Car Display” in the Settings app under “Restrictions.”

This prompted speculations about Apple introducing the iOS in the Car feature with iOS 7.1, or maybe iOS 7.2. The final version of iOS 7.1 is set to reach the public in early 2014, which is in line with Apple’s earlier promise of formally releasing iOS in the Car next year with several car manufacturers.

Otherwise, iOS 7.1 beta 2 brings only a couple of minor changes to iOS, such as bug fixes for tones, removing Touch ID options from the Settings app and placing it in a more prominent spot, and the dark keyboard toggle disappearing from the Accessibility tab.

But this new toggle, leaves plenty of room for speculation and rumours, especially since Tim Cook emphasized earlier this year that iOS in the Car is an important part of the ecosystem, just like the App Store.

Apple’s collaboration with car manufacturers has had its first public results: Toyota implemented the Siri Eyes Free feature into a handful of models. This is the first small step toward Apple’s high aim of bringing its services into the user’s car better than everyone else.

Update: turns out this toggle is not new to iOS 7.1 beta 2, but rather debuted in beta 1 but was just reported today, says iPhoneinCanada.ca reader @acerace113:

@iPhoneinCanada that was there in iOS 7.1 beta 1