Apple retail stores in Canada and the USA will open at 8AM local time on November 1 for the iPad Air launch. According to Apple’s website, the following is stated:

Buy iPad Air at your favourite Apple Retail Store beginning at 8:00 a.m. on November 1. We’ll set it up just the way you like.*

This means if you plan on waiting in line to grab an iPad Air immediately, you can start planning your wait in line.

The iPad Air pricing in Canada starts at $519 for the 16GB Wi-Fi version and $649 for the Wi-Fi + Cellular model. The full price list is below: 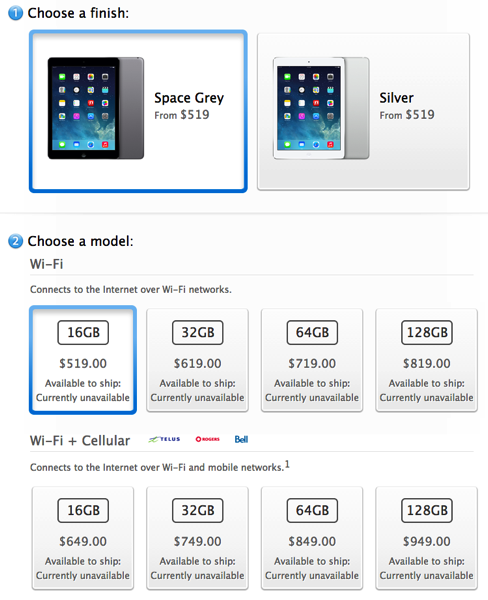 As in the past, Apple resellers such as Future Shop, Best Buy, London Drugs, etc. have also opened early at 8AM for the iPad. So if you don’t have an Apple retail store in your area, you do have options.

The Retina iPad mini doesn’t have a specific launch date, other than “November”. Who’s going to be waiting in line this year for the iPad Air?