After performing various tests to compare the iPad mini 4, the iPad Air 2, and the iPad Pro, here is what Soneira found out about the 2015 iPad displays. The iPad mini 4 shows very impressive improvements and breaks many Tablet display performance records, while the iPad Pro made a strong entrance and first appearance.

Among all the available iPads, the iPad mini 4 takes first place, as it outperformed every other model in all test categories except Contrast Ratio.
The iPad Pro display performed very well in all tests and measurements, earning Very Good to Excellent in all test categories, but it was still outperformed by the iPad Mini 4. It received the highest ranking in True Contrast Ratio, where it came out as the definitive winner and was marked Best with a record 1,631.

However, there were two tests where the iPad Pro’s performance was lower than expected: First, it seems to show a surprising calibration issue for an Apple display. All iOS devices had near-perfect Log-Straight Intensity Scales, but “on the iPad Pro, there is a significant Intensity Scale bump and irregularity at and below 45 percent signal”, Soneira writes. 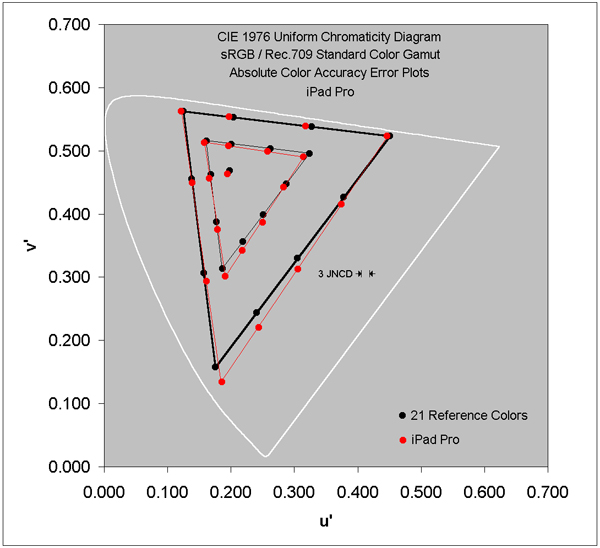 Secondly, in Absolute Color Accuracy, the iPad Pro just barely qualified for a Very Good Green rating, just 6% from the cut-off, a bit better than the iPad Air 2, but nowhere near as good as the iPad mini 4. This doesn’t look good, since the iPad Pro is targeted at graphic artists, for whom colour accuracy is a high priority.

You can read the full iPad display shootout on DisplayMate’s website.