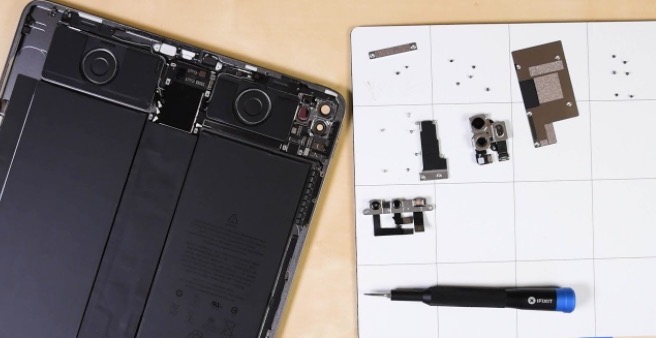 iFixit has shared its latest teardown of Apple’s 2020 iPad Pro. The company dismantled the 12.9-inch iPad Pro and also provided a closer look at the tablet’s internals and the new LiDAR scanner. The new teardown comes on the heels of the company’s recent deconstructing of the 2020 MacBook Air.

The video below is the company’s first remote teardown, filmed at an employee’s home and not the company’s studio, due to the COVID-19 pandemic.

The LiDAR sensor is part of the iPad Pro’s rear camera module. The new sensor allows for depth information to be captured for augmented reality (AR) applications (which aren’t yet readily available).

The video shows a demo of the LiDAR sensor’s projection grid using an infrared camera, showing a sparse laser grid when compared to Face ID’s depth map on iPhone.

The teardown also shows us a closer look at the A12Z Bionic chip, which has an advantage over its A12X predecessor with an extra GPU core, now at eight. The iPad Pro now has 6GB of RAM (up from 4GB; the 1TB 2018 version had 6GB).

The USB-C is still modular says iFixit, while the teardown consists of a lot of glue and overall, this is an “incremental update” for the iPad Pro, compared to the 2018 model. The battery is the same and nothing else has really changed, aside from the A12Z and new LiDAR sensor.

iFixit gave the iPad Pro a repairability score of 3 out of 10 (10 is the easiest to repair), noting anyone looking to replace or tinker with this tablet will have to deal with lots of adhesive strips and prying.

While this isn’t the first teardown of the 2020 iPad Pro, iFixit always provides a clear step-by-step walkthrough of what it takes to dismantle an Apple product with surgeon-like precision.