The folks at iFixit have performed their teardown of Apple’s latest iPad mini 4, dubbed a smaller version of the iPad Air 2 by Apple. Let’s see just how similar these iPads are to each other, shall we?

iFixit’s teardown has revealed many similarities and qualities from the iPad Air 2 within the iPad mini 4. The latter now uses the same laminated screen used in the iPad Air 2, which helps slim the tablet down by 18% to 6.1mm thick, versus 7.5mm before. The FaceTime camera is also slimmed down as well.

Inside, iFixit confirmed 2GB of LPDDR3 RAM, plus a battery that’s smaller than before at 5,124 mAh (iPad mini 3 battery is 6,471 mAh), but still provides the same battery life according to Apple.

Earlier this week, ArsTechnica released Geekbench scores of the iPad mini 4 to note it was running an overclocked 1.5GHz A8 CPU, which was faster than the 1.4GHz A8 chip found within iPhone 6 models. 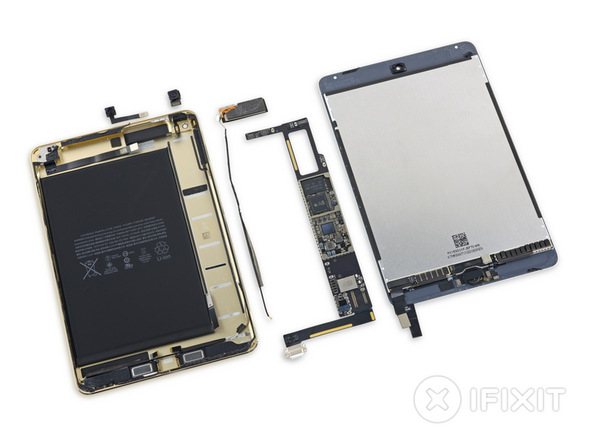 The teardown experts go on to say “This iPad is some kind of Mini/Air hybrid—half its antennas on the top, like an Air, half on the bottom like a standard Mini.” Inside the guts we see the battery is thinner and is single cell instead of two like before. Speaker holes are now at a few versus many, while dual rear-facing misc now are placed around the new 8MP iSight camera, where the previous rotation lock slider used to reside. Inside, the Touch ID cable is now built into the display cable, just like the iPad Air 2, unlike before.

If you want to take a look at an iPad mini 4 unboxing, check out the video from DetroitBORG from YouTube: