When Phil Schiller took the stage on October 16 to present the all-new iPad Air 2, one of the key features he emphasized was the innovation behind the device’s display: this year’s full-sized iPad features a fully laminated display with anti-reflective coating. But is the display better compared to last year’s? DisplayMate Technologies‘ Ray Soneira performed his usual display shoutout to find out. 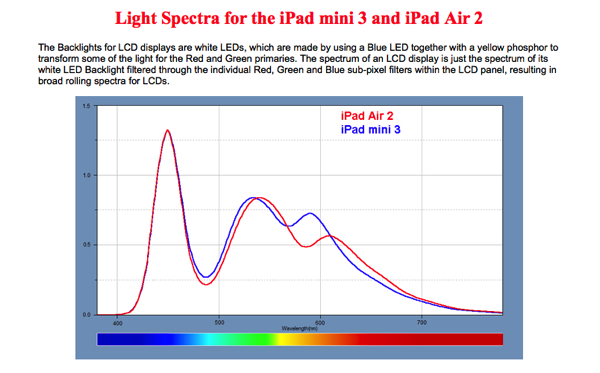 As with every new device launch, Soneira tested the new iPad Air 2 display and found that the anti-reflection coating of the cover glass brings a needed innovation that gains “the least reflective display of any Tablet in the world” title. However, Apple opted not to use the same high-performance display technology enhancements the iPhone 6 and iPhone 6 Plus have, which, by the way, ranked the devices as “the best-performing smartphone LCD display ever tested”.

From this perspective, the iPad Air 2 could be a disappointment, as the competitors, such as tablets from Amazon, Google, Microsoft and Samsung, outperform the iPad Air 2 display multiple areas.

However, other than the new anti-reflection coating and bonded cover glass, the display on the iPad Air 2 is essentially unchanged and identical in performance to the iPad 4 introduced in 2012, and is actually slightly lower in performance than the original iPad Air (for example 8% lower Brightness and 16% lower display Power Efficiency) – most likely the result of an obsession with producing a thinner Tablet forcing compromises in the LCD backlight.

Much more significant is that the iPad Air 2 does Not have the same high performance display technology enhancements that we measured for the new iPhone 6 and iPhone 6 Plus, which we rated the best performing Smartphone LCD Display that we have ever tested. While the iPad Air 2 has an all around Very Good Top Tier display, and most buyers will be happy with its performance, the displays on the Amazon, Google, Microsoft and Samsung Tablets that we have tested have better display performance in Absolute Color Accuracy, Brightness, Contrast Ratio, Viewing Angle, and Power Efficiency.

However, there are areas where the iPad Air 2 display breaks records: the most accurate (pure logarithmic power-law) Intensity Scale and Gamma, most accurate Image Contrast, (by far) the Lowest Screen Reflectance, and the Highest Contrast Rating for Ambient Light.

As for the iPad mini 3, Soneira calls it a major disappointment, “The iPad mini can only be described as the perpetual Runt of the litter…”, he says. For the full report, hit the following link.