Apple has maintained its lead in the worldwide tablet market in the second calendar quarter of 2015 despite a 17.9% drop in iPad sales compared to the same period a year ago, according to a fresh report from the International Data Corporation (IDC) Worldwide Quarterly Tablet Tracker.

Fact is, the global tablet market declined 7% on a year-over-year basis during the past quarter, and 3.9% compared to the previous quarter due to limited hardware innovation and few vendor portfolio updates. 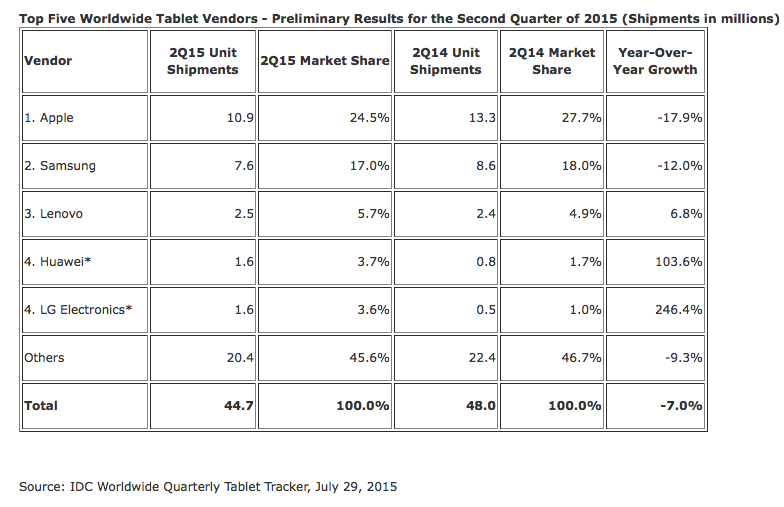 “In the first quarter of the year, Apple and Samsung accounted for 45% of the market and this quarter, with the growth of vendors like LG, Huawei, and E FUN, their combined share dropped to 41%. Each of the growing vendors managed to address available pockets of growth in the market; connected tablets for LG and Huawei, larger tablets and 2-in-1s in the right price bands for E FUN. This trend is also something we see on a wider scale with the top 5 vendors accounting for 54% of the market, down from 58% last quarter. It is worth mentioning that Huawei enters the top 5 ranking for the first time, while E FUN has re-entered the top 10 after more than a year, further indicating that the vendor landscape is indeed evolving.”

As the global shipment of tablets hardly hit 44.7 million units, IDC highlights a shift in the tablet landscape as Apple and Samsung lose market share. In the June quarter, the top five vendors’ market share dropped, while the “other” category (which includes the rest of the tablet manufacturers) has grown to 45.6%.