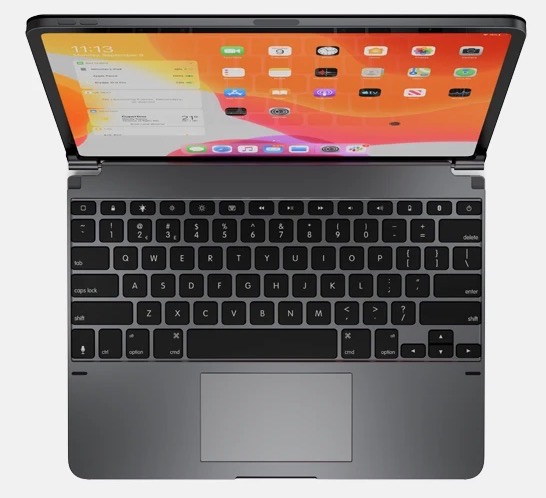 According to The Information, Apple is planning to release and iPad Keyboard with Trackpad in 2020. This accessory is already set for “mass production” and will debut alongside next iPad Pro models:

Apple is planning to release an iPad keyboard accessory later this year that will include a built-in trackpad, the latest step in its effort to position the tablet device as an alternative to laptop computers, according to a person familiar with the matter.

Apple is preparing the keyboard for mass production, and one of its main manufacturers is Foxconn Technology, the Taiwanese contractor that makes most of the world’s iPhones, the person said. The company will likely release the accessory alongside the next version of the iPad Pro expected later this year, the person added.

This accessory may hint at future features coming to iPad Pro. With iOS 13, Apple already lets users connect a Bluetooth mouse, as part of an AssistiveTouch feature.

Does iOS 13.4 beta code hint at anything related to this iPad keyboard with trackpad? According to developer Steve Troughton-Smith, nothing is there right now.

He speculates, “I’ll reiterate that as of right now, iOS 13.4 doesn’t have any changes to suggest trackpad support beyond what AssistiveTouch does. It does have plenty of new keyboard features, but if there’s advanced mouse cursor support coming it’s been compiled out of the builds.”

Last month, accessory maker Brydge released pre-orders for its Pro+ keyboard with a built-in trackpad for iPad Pro, priced at $229 USD and coming in April.

Those seeking further control over their iPad, a trackpad comes as a welcome addition. Let’s wait and see what happens next for the iPad.