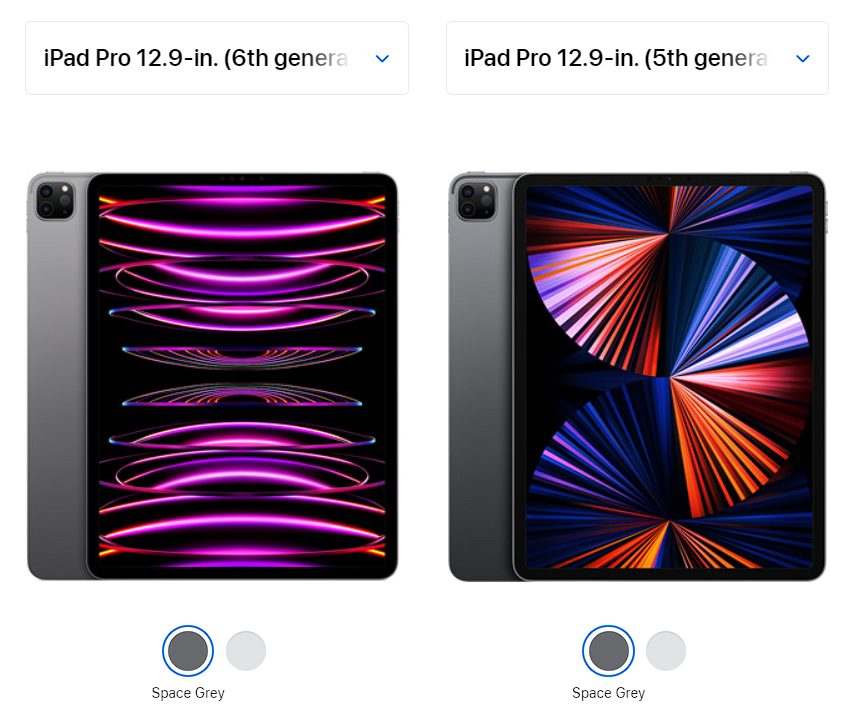 These new models replace the M1 iPad Pro from 2021 and deliver the “ultimate combination of portability, versatility, and unbelievable performance.”

Apple’s iPad Pro making the jump to the desktop-class M1 chip back in 2021 was quite possibly the biggest performance jump the iPad has ever seen. The 2022 iPad Pro brings a more modest, generational uplift in performance with its M2 chip, but it is otherwise essentially the same as its predecessor.

Alongside today’s product launches, Apple also quietly hiked iPad pricing in Canada across the board.

For both models, the larger-screened versions have XDR displays with 1000 nits of max full-screen brightness and 1600 nits of peak brightness in HDR content only.

The 2022 iPad Pro’s M2 chip is quite possibly its only noteworthy upgrade, since the design, display, and cameras all remain more or less the same as its predecessor’s.

While both M2 and the 2021 iPad Pro’s M1 chip have eight CPU cores, M2 has two additional GPU cores (10 instead of eight). According to Apple, M2 delivers 15% faster CPU performance than M1, while GPU performance gets a 35% bump.

Thanks to Apple’s M2 chip, this year’s iPad Pro gains a dedicated media engine for hardware-accelerated ProRes and ProRes RAW processing, along with a ProRes encode and decode engine. Not only can you record in ProRes on the new iPad Pro (more on that in the next section), but working with it in an editing workflow is also easier.

Apple hasn’t made any hardware changes to the camera setup on this year’s iPad Pro — you still get the same 12MP wide-angle and 10MP Ultra Wide snappers as the M1 iPad Pro, but with Smart HDR 4 for photos instead of Smart HDR 3.

This year’s model also has the same 12MP Ultra Wide camera on the front, along with a TrueDepth sensor for Face ID.

Both iPad Pro models have a USB-C port with support for Thunderbolt and USB 4. They also have Apple’s Smart Connector on the back.

The M2 iPad Pro and the M1 iPad Pro have identical audio setups with a four-speaker array.

Both models are compatible with the 2nd generation Apple Pencil. However, the 2022 M2 iPad Pro one-ups its predecessor with a new Apple Pencil feature called “hover.”

According to Apple, this means the Apple Pencil “is now detected up to 12 mm above the display, allowing users to see a preview of their mark before they make it.”

The new M2 iPad Pro models get upgrades to Wi-Fi 6E with speeds up to 2.4 Gbps, up from Wi-Fi 6 with speeds up to 1.2 Gbps on their predecessors, and Bluetooth 5.3 (from Bluetooth 5.0). On this year’s Wi-Fi + Cellular versions, Apple dropped support for GSM/EDGE while everything else remained the same.

For this year’s entry into its iPad Pro line, Apple essentially stuck a new processor in what is the same chassis as last year’s iPad Pro.

As such, the two generations appear identical on the outside and sport the same squared-off design aesthetic. It looks like Apple was too busy redesigning its entry-level iPad this year — or simply had too many 2021 iPad Pro shells lying around in inventory.

Since the M2 iPad Pro and M1 iPad Pro share the same chassis, they have identical physical dimensions. They also weigh the same, although the Wi-Fi + Cellular versions of this year’s iPad Pro models are just a gram or two lighter than their M1-toting counterparts.

If you’re a professional looking for a high-performance tablet that you can take with you on the go, the iPad Pro is absolutely what you should be looking at.

The iPad Pro was already a great device, and now it’s “supercharged with M2.” Hardware-accelerated ProRes processing could prove extremely beneficial for video editors, and digital artists might also want to get their hands on it for the new Apple Pencil “hover” feature.

Apart from the M2 chip, unfortunately, the new iPad Pro is essentially the same tablet as the 2021 M1 model which was unveiled a year and a half ago. Some folks might be disappointed by the lack of changes, especially if they were hoping to upgrade from the M1 iPad Pro.

Apple has discontinued the M1 iPad Pro, so you won’t really be buying it new anymore. If you already have an M1 iPad Pro and aren’t pressed for more horsepower, however, you will probably be better off waiting for a bigger update to the product line than the M2 models.

That said, if you simply want to be at the bleeding edge of whatever Apple does, then what are you waiting for? You can pre-order the new iPad Pro today on Apple.ca, with an official launch slated for October 26.