According to a report from Digitimes, the next generation 9.7-inch iPad will begin production in July-August, featuring a thinner design like the iPad mini, with a weight reduction of 20-30%:

The next-generation 9.7-inch iPad is expected to adopt a thin-film-type touch panel solution to reduce its weight by 20-30% and will adopt a slim bezel design to increase the display area. The new iPad’s industrial design reportedly will also be modified, the sources said.

This next-generation iPad will help Apple’s 9.7-inch tablet shipments hit around 8 million units in the third quarter and increase possibly in the following quarter around the holiday season, according to sources.

As for the iPad mini, the second generation tablet may see its launch delayed from September to November, according to Taiwanese supply chain sources.

Volume production of a new-generation 9.7-inch iPad will begin in July-August with shipments in the third quarter estimated at five million units. Meanwhile, a second-generation iPad mini may see its volume production postponed from September to November, according to Taiwan-based supply chain makers.

Why the switch? One possible reason is due to the fact the iPad mini was so popular during its launch, it impacted 9.7-inch iPad sales, so to avoid this again Apple will launch a new version of its regular-sized iPad first:

As for the second-generation iPad mini, some market watchers believe the delay is because 9.7-inch iPad sales were seriously impacted by iPad mini in 2012, and so to avoid the situation from happening again, Apple has turned its product focus for 2013 to the new 9.7-inch iPad.

Other market watchers figure the next iPad mini delay could be a result of Apple’s supply chain unable to meet the mass-production schedule. This delay could drop Apple’s overall iPad shipments, which are estimated to be in the 80-100 million range for 2013. Of course, Digitimes’ reports are hit or miss, but there are times when stories will ‘stick’.

KGI Securities analyst Ming-Chi Kuo previously reported the next-gen iPad would launch first in the third quarter, followed by the iPad mini’s next iteration, equipped with a Retina display. A follow-up report to his timeline in late April noted possible ‘technical challenges’ to the iPad mini, thus leading to a possible delay in launch of the device. 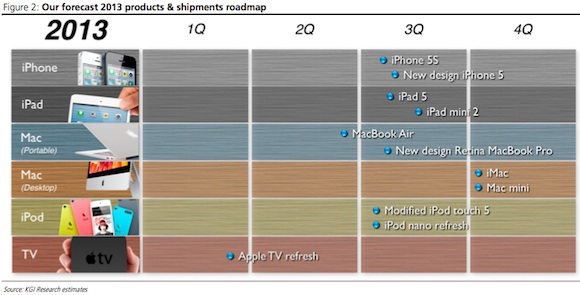