Apple’s iPad Shipments to Face Biggest Plunge Ever in 2015: KGI

It looks like Tim Cook’s confidence couldn’t convince well-connected analyst Ming-Chi Kuo of KGI Securities. In a note issued today to investors and obtained by AppleInsider, Kuo predicts the steepest decline of iPad sales yet for 2015, with a more than 50% drop in the first quarter of the current calendar year. Unfortunately, the anticipated 12.9-inch iPad Air Plus or iPad Pro won’t turn this downward trend around. 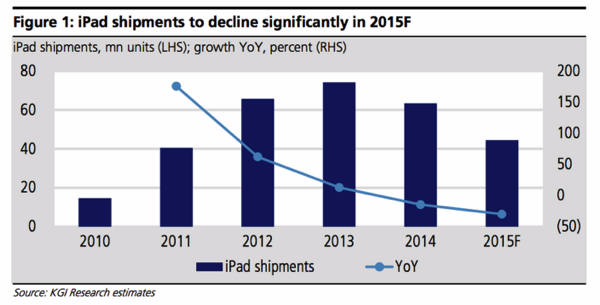 The analyst expects iPad shipments to decline 52.7% in the current quarter, to 10.1 million units, and to continue the downward trend by dropping another 30% to 40% in the second quarter of 2015 to 7 to 8 million units.

According to Kuo’s forecast, Apple will struggle to hit the 45 million mark this year, a 30% decline year-over-year. This isn’t a hit just to Apple: the decline in iPad sales will affect participants in the Apple supply chain as well.

While Apple is on track to launch the anticipated 12.9-inch iPad Pro (or iPad Air Plus), the new device can’t turn this downward trend around, Kuo says.

The analyst’s prediction comes shortly after IDC reported the first drop in tablet sales since the iPad marked the launch of this new market. Apparently, this trend will continue this year.