The iPad has received the highest “overall customer satisfaction” score in J.D. Power’s “2014 U.S. Tablet Satisfaction Study – Volume 1”, which was released today. Since price was one of the key reasons for tablet choice, Apple received an overall score of only 830 because of its price tag, the study suggests.

As the study highlights, lower price is the no. 1 influencer in the consumer’s tablet choice, with a quarter of current tablet owners citing price as the main reason for selecting a tablet brand. This is up 4% compared to 21% reported last year.

“Since the inaugural U.S. Tablet Satisfaction Study in 2012, a number of new tablet OEMs have entered the U.S. marketplace, differentiating themselves to satisfy a growing interest in owning a tablet,” said Kirk Parsons, senior director of telecommunications services at J.D. Power. “Price has significantly impacted the marketplace. The average purchase price continues to drop and consumer expectations of tablet performance and features are different than they were for past products. Subsequently, overall satisfaction has declined, especially with ease of operation, as navigation features and functions have changed.”

It is also worth noting that besides a price drop in the average tablet purchase price, overall consumer satisfaction also decreased by 18 points, from 853 to 835, the study highlights. The main driver, apparently, is the drop in satisfaction with the ease of use.

The 2014 U.S. Tablet Satisfaction Study – Volume 1 study is based on experiences evaluated by 2,513 tablet owners, and was conducted between September 2013 and February 2014. 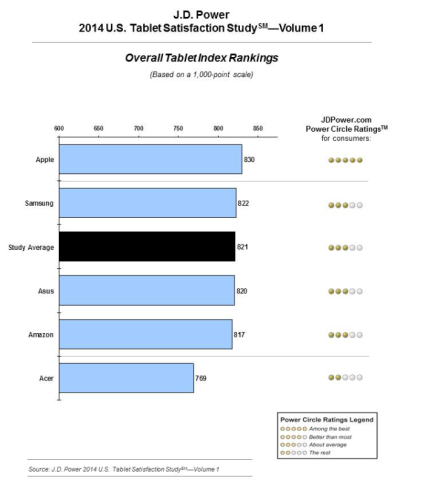